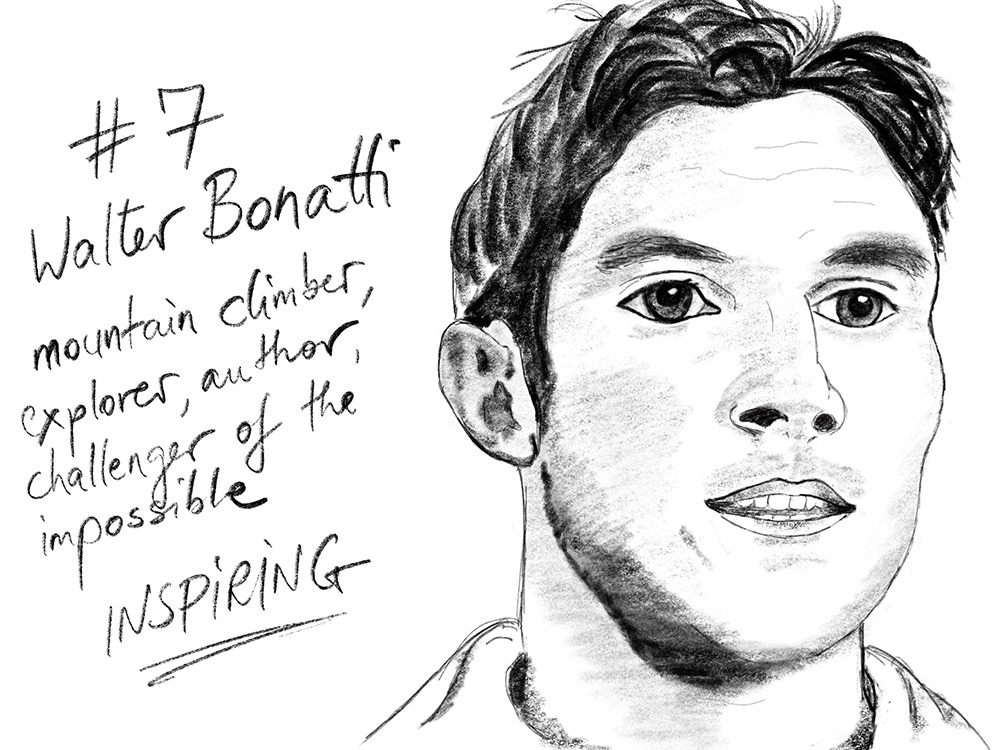 After quite a few portraits from my own list, it’s time to start presenting some of our team’s choices. I’m kicking off with a phenomenal man who never gave up fighting for the truth and his own reputation when his fellow Italian climbers tried to blame him for their insufficiencies. He was Hedwig’s first choice (check out her team profile here) when she joined the team. She loves the mountains and is a passionate hiker herself.

I hadn’t heard of Walter Bonatti before and was very curious when she told me his name. While I won’t tell the story mentioned before, you can read it here or in the many books and articles on the topic, I will talk about what made this man an exceptional human being an inspiration for so many mountain climbers to come.

Bonatti was one of the greatest mountain climbers, if not the greatest climber of our times. He climbed many routes for the first time in the history of mountain climbing, many of them alone, without any help except for the simplest climbing gear and his own ingenuity. With every new climb he aimed at improving himself as a human being, testing out his limits and overcoming them. He never used modern climbing gear, as he wanted to face the impossible, challenge it and make it possible. And he succeeded where many climbers failed or even died.

“The reality is five percent of life. Man must dream to save himself.” (Walter Bonatti)

Those who know me call me a dreamer. I’ve often had to listen to people telling me why my dreams wouldn’t come true and how the odds were against ever turning them into reality. I would dream too big, too crazy, too impossible dreams. But for me, dreaming has always been a means to motivate myself to work toward another reality, a better one. Bonatti never reached the top of the K2. He came very close to it in that first expedition that made him famous, but almost ruined his career. Still he played the most significant role in it being conquered by men for the first time in history and he was a far better man than those he aided to reach that unprecedented goal. He gave up that particular dream and persevered with others, always with the same goal in mind: to challenge the impossible with honest, ethical means and become a better person along the way.

“Mountains are the means, the man is the end. The goal is not to reach the tops of mountains, but to improve the man.” (Walter Bonatti)