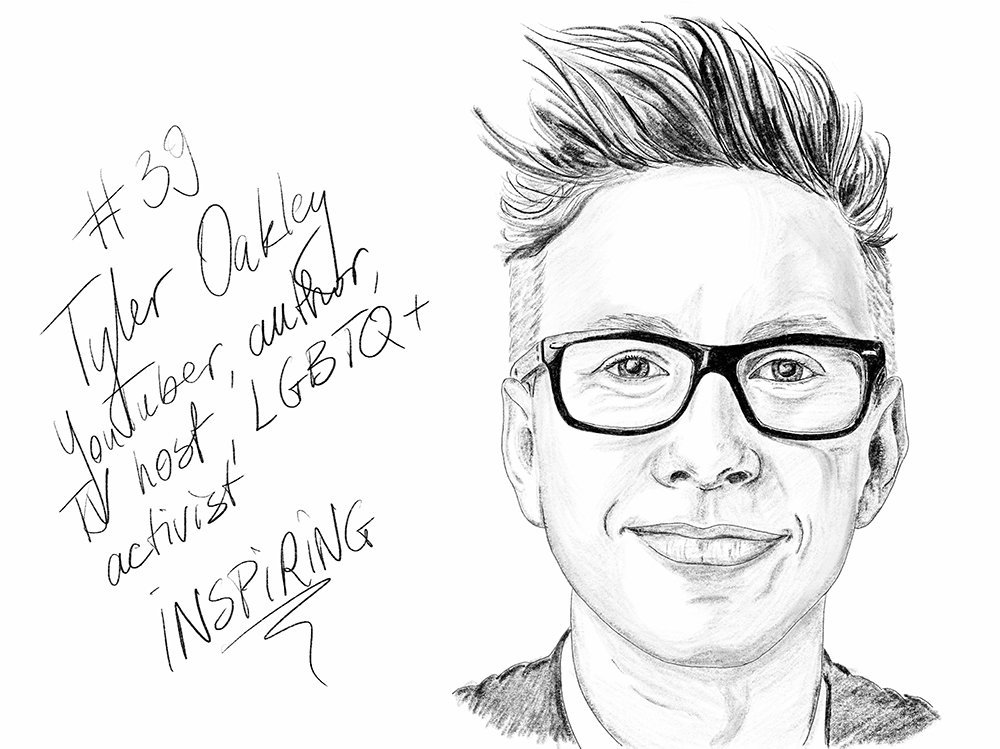 Pride time is almost here and as out staff is 100% queer, we have to address queer issues. Queerness is part of who we are, in both senses of the word. We are all a bit strange, and definitely in a good sense. And we are gay / lesbian / queer, call it as you like it. The name doesn’t really matter. It would be a lie to say that our sexuality doesn’t define us in a way, because it does influence our behavior, our thoughts, our interaction with the world. Our otherness makes our life busier and sometimes more difficult: we often have to explain ourselves for being who we are, or even worse, we have to defend who we are.

"This is why homophobia is a terrible evil: it disguises itself as concern while it is inherently hate." (Tyler Oakley)

That’s why we need people like Tyler Oakley, who is one of the best examples of positive LGBTQ+ representation I’ve encountered in my search for inspiration. And because Chris is the one who pointed him out to me, I asked him to say a few things about him.

Alice: When did you hear of Tyler Oakley the first time and how did  you hear about him?

Chris: I found him on youtube. That’s it. And you asking this question made me realize how old I am now. Because Tyler Oakley is on YouTube for over 10 years (side note: it’s 12 and a half years actually), so more than a decade, that’S really really long for someone to be on YouTube. And I’m pretty sure I’ve been watching him from the beginning, so I’m one of those Tyler Oakley guys.

"I was taught that being myself was not only okay, but encouraged—and by being unapologetically yourself, you thrive and inspire others to thrive." (Tyler Oakley)

Alice: Why do you think Tyler should be one of the first 52 portraits?

Chris: Tyler has done so much in these ten years! He was one of the first openly gay YouTubers, and that’s probably why I watched him. He is definitely an inspiration for a lot of people out there. If you just consider the things he’s done on YouTube, that’s a huge achievement to speak of. And Tyler Oakley also wrote a book, it’s called BINGE. I thought it was like, yesterday, but I checked it, it was four years ago. These years have past super quickly.

Tyler Oakley is one of a kind. If you watch his videos, you know he is crazy. And he does so much. From engaging with so many other people, inspiring so many people, he wrote that book… If you want to learn more about Tyler Oakley, there is a podcast, you can listen to that. I has an episode every week, with over 280 episodes already. It’s psych babble, by the way. Tyler is one of those people where you think they have something special. And from the beginning of his YouTube channel, where he was just this kid talking about things from his life, be grew up into this really special person. In the US everyone knows Tyler now. He is also a TV show host at the moment. He is everywhere. He grew up tremendously during these years, starting with an audience of 12 followers, to ver 7 million 10 years later. And he doesn’t just do goofy stuff, he is active politically, he even interviewed Michelle Obama. He does a lot for the LGBTQ+ community, especially for the young. He is just amazing.

Alice: We are part of this community, and we haven’t spoken much about it, because we didn’t want portrait52 to be reduced to an LGBTQ+ company. But it is part of who we are and I think we should get more involved. How do you think we can support the community?

Chris: By spreading the word I would say. And that’s what we’re doing at the moment. We have Ellen, we have Connor, now we have Tyler. If we look at our staff, you can’t be more into the LGBTQ+ community than we are. Every one of us. That’s funny, if we come to think about it. And by being the kind of company that we are, we show there is nothing that’s different to everybody else. We can do whatever we want, because we are just how we are, and we are showing everyone out there that it’s absolutely ok, it’s absolutely normal, and there’s nothing to worry about.