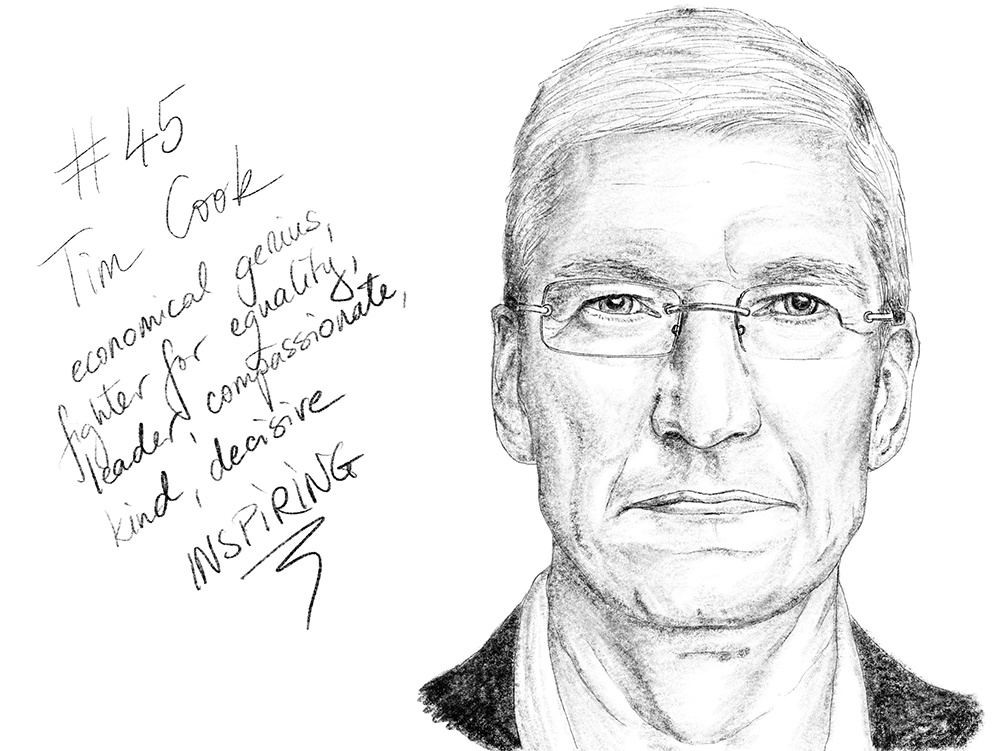 “Life is fragile. We’re not guaranteed a tomorrow so give it everything you’ve got.” (Tim Cook)

I think this is the first blog post I‘m starting with a quote. It‘s not because I want this portrait to have a special status. I don‘t. Those who know me may think I‘m biased. After all, I spend three to eight hours a day on my iPad and tell everyone this is the best piece of technology I have ever held in my hands. I‘m a real fangirl. I already made that obvious in my Steve Jobs portrait.

But this is not the reason why I chose Tim Cook. He was on Chris’s list as well, and on the lists of some other friends. While many admired Steve Jobs for being a visionary, but loathed the way he worked and treated those who worked with him, we admire Tim Cook for stepping into Steve’s shoes and filling them completely, while being an entirely different person. Being the leader of the most valuable company in the world without being a dick. Pardon my language in this context.

“I hope that people remember me as a good and decent man. And if they do, then that’s success.” (Tim Cook)

Yes, this is indeed the feeling I have about Tim Cook. I think he is a good and decent man. And I think this is as valuable as being a visionary, if not even more valuable. The world needed a Steve Jobs to make the iPhone reality and revolutionize the mobile phone. But it needs a Tim Cook to show the world that making your shareholders happy and turning the world into a better place can go hand in hand. Tim Cook addresses and tackles the issues that come with employing  hundreds of thousands of people with respect and empathy. He is humane, he is relatable and he speaks up for the right causes.

“Price is rarely the most important thing. A cheap product might sell some units. Somebody gets it home and they feel great when they pay the money, but then they get home and use it and the joy is gone.” (Tim Cook)

So let’s talk products. There was a lot of pressure when Tim Cook took over Apple after Steve Jobs passed way. Almost everybody I know said that the tragic event would be the beginning of the end, that from that point on we would witness Apple’s decline. That a man of numbers could never replace the visionary, the guy who foresaw the future of technology. That the products would become less innovative and another company would take Apple’s place at the top of Mount Olympus.

But Apple’s drive for excellence not only remained the same, I think it also became more connected to what our society needs right now. Apple still makes excellent products. There’s no compromise in quality, but now there’s also more affordability. Different products for different people. No more arrogance, no more elitism.

“When technological advancement can go up exponentially, I do think there’s a risk of losing sight of the fact that tech should serve humanity, not the other way around.” (Tim Cook)

There’s excitement and thrill in innovation, but I’m a bit worried about the focus on tech companies in the world today. Higher, faster, newer, more. That’s not Tim Cook. He stands for better. Better products, better people, better world. He puts himself out there, admits his faults and errors, stays humble about his achievements. He leads by example.

That’s why I don’t just admire him. I also like him.

“You can only do so many things great, and you should cast aside everything else.” (Tim Cook)

Side note to why I started with that particular quote. I do believe we should give everything we’ve got. I’m not there yet. I’m working on it. I’ll let you know when I get there, but you’ll probably notice.