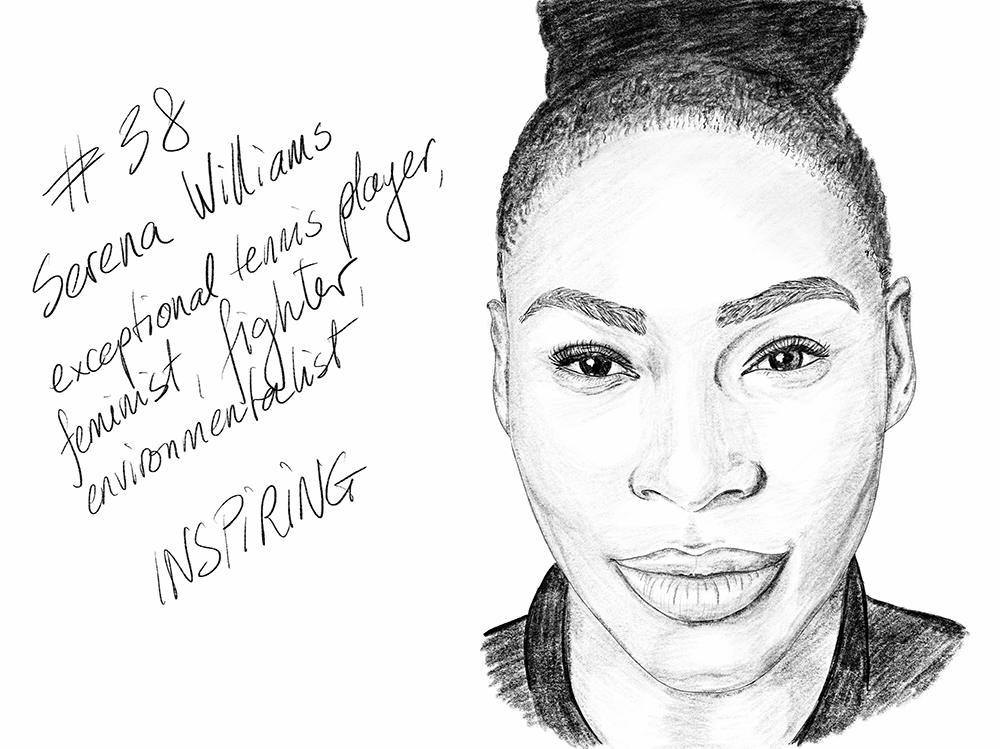 I used to watch a lot of tennis in my teenage years and in my first twenties. I was in love with Steffi Graf. Her grace, her elegance, her amazing legs. I know that was very superficial of me, but I was just discovering my sexuality back then and I found a particular kind of legs very attractive. I watched every game I could, suffering deep woe when she lost, cheering and feeling high when she won. Best drug ever.

So why didn’t I choose to put her on my first 52 list? She has done some pretty impressive things, established records in her active player’s time, has done amazing philanthropic work since she retired. She’s quite inspiring, actually.

"I am lucky that whatever fear I have inside me, my desire to win is always stronger." (Serena Williams)

But when I had to choose between two astonishing female tennis players, I had to go with Serena Williams. Although I never liked her game style. Not during the time I used to watch a lot of tennis, I like it now. The truth is, I can relate much more with Serena Williams than with Steffi Graf, although the opposite would seem more obvious. I’m white, I’m at least a quarter German, I rarely have bursts of temper.

But then again I do have them from time to time. And I have a hard time apologizing, although I know I’m in the wrong. I can be very emotional, even if I don’t show it most of the times. I hate it when people point out my mistakes. I’m in for the win, and I don’t let fear cripple or paralyze me.

"I really think a champion is defined not by their wins but by how they can recover when they fall." (Serena Williams)

Serena Williams is not just probably the best female tennis player of all times, she is also a champion of comebacks. All her records (just wiki google them, it would take at least two blog posts to write about those), her achievements came with a price she was willing to pay. Fallbacks, injuries, defeats, being constantly confronted with racism in a white dominated sport. Self-doubt. You name them. She went through all of them and got out stronger and more determined than ever.

"Think of all the girls who could become top athletes but quit sports because they’re afraid of having too many defined muscles and being made fun of or called unattractive." (Serena Williams)

At the beginning of her career I only saw her game and the way she sometimes treated her opponents or the referees. I read the negative headlines and I shaped my opinions around them. I saw a young woman with an unparalleled physical presence, who couldn’t deal with her own mistakes and blamed the others for them. But over the years I realized that her physicality was not a gift of nature, that had bestowed her with an unfair advantage, but it was hard work, the hardest in the tournament. It was the desire to be the best that had motivated her to work out more and become stronger. It was her ambition that kept her going, but also her belief that she could be the best, she would be the best eventually. Over and over again.

"The success of every woman should be the inspiration to another. We should raise each other up. Make sure you’re very courageous: be strong, be extremely kind, and above all be humble.“ (Serena Williams)

You might call Serena Williams unfair, bad-tempered, overly emotional, too proud. But before judging her on her faults, think about what had led to that behavior on court. Think about the other Serena, the mother, the environmentalist, the amazing athlete she has become through sheer will power and hard work. An inspiration for black and white girls and women alike. Myself included.