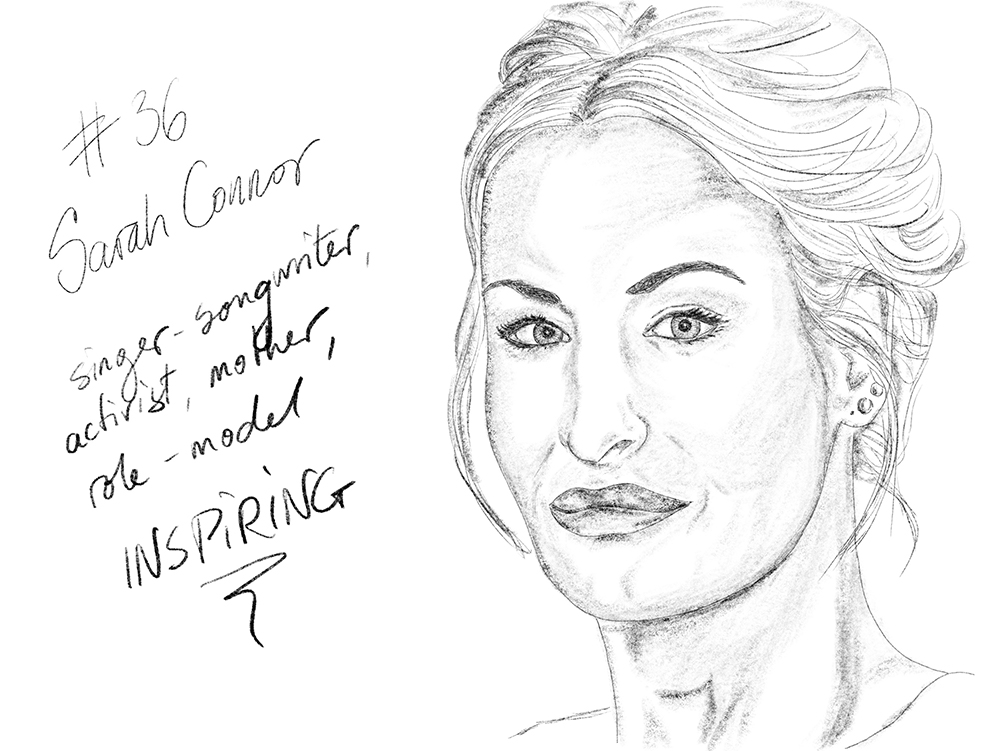 When it comes to music, lyrics are more important than the actual melody. To me, that is. I can understand it when people love the song without listening to the lyrics, sometimes the melody itself, the music is so strong and emotional that words might be unnecessary, or other times the rhythm is absolutely fantastic and the lyrics might just spoil it. But overall I can say, if I don’t like the text, I don’t like the music.

That’s why I’ve never been a big fan of Sarah Connor. In fact, I didn’t even know her until I met my wife, who really like her. I had to listen to the music quite a few times in the car, and while Sarah had a very beautiful voice, I always thought it was wasted on superficial texts and mainstream melodies.

Meanwhile I have come to love this woman and learn a lot from her, but as I was introduced to Sarah Connor by Diana, my other half, I would let her explain why Sarah has made it to the first 52 list.

Alice: What did you always like about Sarah Connor?

Diana: I always found her very sexy, very beautiful. She was the woman I always wanted to be: sexy, slim, successful, everything I always wanted to be. And I always liked her music. Maybe not everything, it was ok, it was nice. But I found her gorgeous, and that’s why I also listened to her music. But then she had this reality show with her ex-husband, and I didn’t like her anymore. She didn’t seem to be very intelligent in that show, she seemed so arrogant and superficial. These things turned me off.

Alice: When did that change? What made you thing that this woman seemed to have changed completely?

Diana: It was during the Sing My Song show, when she sang all those other songs, also in German. That’s when I noticed that she really could sing, not just light pop songs, but also really deep stuff, with a lot of emotion. That’s when I thought, ok, as a singer she is really good. After the show she published her first German album. The texts were good, some were very good, they really touched me, and I started liking her as a musician again. Still not very much as a person, but I tried not to thing about her that way at the beginning. I still had those bad memories from the  reality show.

Then her texts became more and more profound, they weren’t just love songs anymore, they treated serious topics and made political statements. She took sides with the refugees, for example, sang about how we shouldn’t always be afraid of what is foreign and we shouldn’t close our eyes to all the suffering around the world. She also took in a refugee family for a certain time a few years ago and didn’t tell anyone about it. When the story came out, she said she just needed to do something, to help somehow. She didn’t really want to talk about it, she didn’t want to use this story to advertise for herself. And that’s when I started to think that she really meant what she sang about, that it wasn’t just the music, it was the person that had truly changed.

It was a remarkable change, it showed how this superficial starlet with her sexy mini skirts and high heels changed into a woman with depth, a woman who cares about the society she is part of and who uses her celebrity status to speak about uncomfortable issues, even if that might cost her some fans or might change her image. One more example. When she published her song Vincent about a gay young man, she knew she took a big risk. Many radio stations didn’t even play the song at the beginning. But she showed her support for the LGBTQ+ community anyway.

I’m deeply impressed about this change from a seemingly superficial person to someone fighting for her values and beliefs, contributing to changing the world every day of her life.