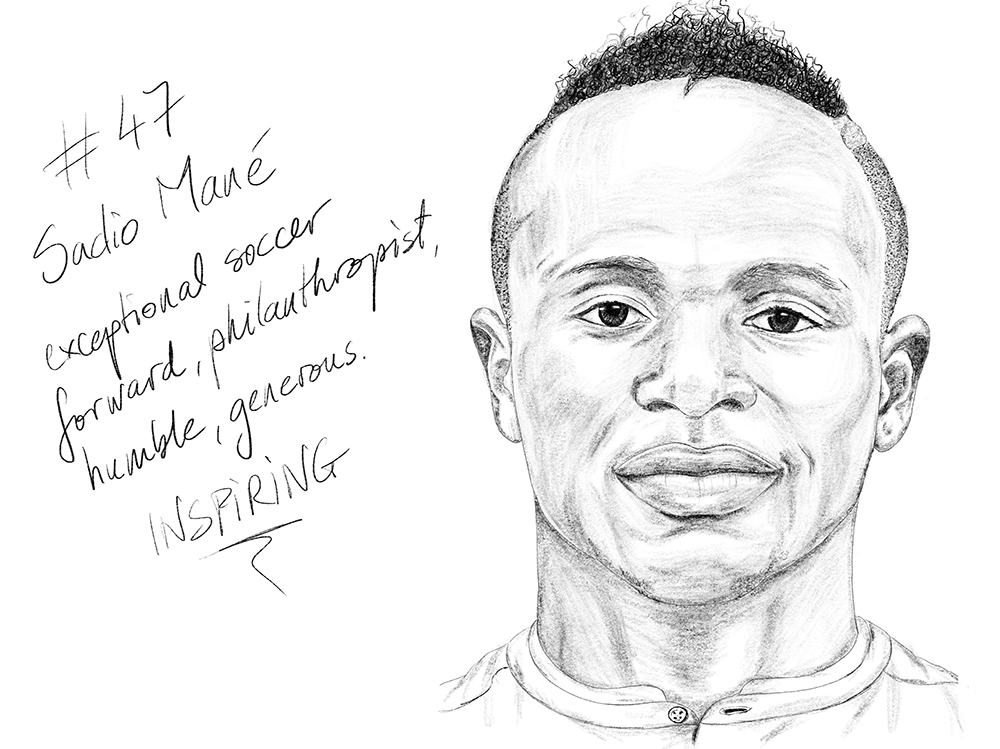 I love soccer, what can I say... Third soccer player on the list. Blame it on my passion for the game, blame it on the media, who puts soccer on a pedestal. But if you ever played soccer and you felt the energy on the field when a team plays together as one, you know it’s something magical about it.

I thought about looking for people from another sport, but this guy impressed me so much that I had to write about him.

First time I heard of Sadio Mané outside of Liverpool’s microcosm was in an online news article. It showed the soccer player looking at his iPhone with a cracked display. The headline said something in the line of: “The one soccer player who can still use an iPhone with a cracked display”. It wasn’t the best headline for the article, still it made me curious, and I read on.

“I just try to work harder and harder every day to improve and get better and better.” (Sadio Mané)

Sadio Mané was born in the village of Bambali in Senegal. When he was seven years old his father got sick. He survived o few weeks on traditional medicine, but after a while his condition worsened. There was no hospital in the village, and when the father’s condition got critical, his family couldn’t bring him to the hospital in a nearby village soon enough. He might have survive, had there been medical care any closer than the next village.

At that young age, Sadio knew he had to do something to help his mother. It was a hard burden to cary. But he also dreamed to become a soccer player. He played barefoot, sometimes using a grapefruit as a ball. His family didn’t support him,  it he didn’t give up. At the age of 15, he left home and went to Dakar, Senegal’s capital, to play professionally. Those who are as passionate about soccer as I am know how that turned out.

But there’s a lot more about Sadio Mané than being an excellent forward. His father’s death, as tragic as it was, played a big role in him becoming one of the very few soccer players more interested in helping others than having diamond watches, the newest iPhones or a few ridiculously expensive cars in their garage.

“Why should I want 10 Ferraris, 20 watches or two planes? I survived hard times, played football bare-footed, did not have an education. Today I can help my people build schools, stadiums and buy clothes and food. I prefer my people receive some of what life has given me.” (Sadio Mané)

Mané doesn’t play soccer to amount riches or to brag with his cars. He plays soccer to give back to the place where he came from, to help his people get the chances he didn’t have. There was no hospital in his home town when he grew up. His sister was born at home, his father died in the absence of available medical care. So he’s built a hospital in his home town out of his soccer player salary. He played football on the streets, barefooted, so he’s built a stadium and buys clothes and shoes for his people, providing them with a better life. He couldn’t have proper education, so he builds schools, so that others can learn better. And while doing all this he stays humble and grateful, acknowledging his good fortune.

The boy who left his family at the age of fifteen in order to chase his dream of becoming one of the world’s best soccer players has become a man who is changing the world. Little by little, every single day. I am one of those who like to point out the absurdity of paying soccer players millions and millions of dollars a year. But in this case, I really don’t mind.