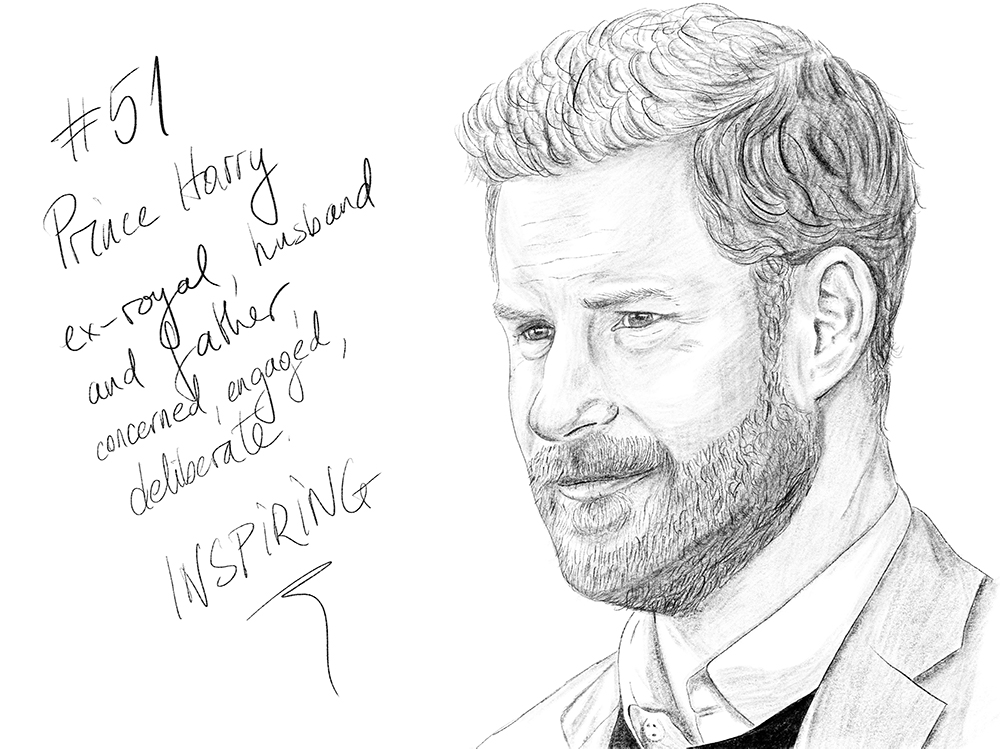 One but last. And what a journey it’s been! It’s taken me over a year, I didn’t make it as planned, but I’m here. Portrait No. 51. You might think: „Prince Harry? Common!“ But bare with me till the end…

What makes royals so attractive is the fact that we normal people can never ever get there. Be one of them. The probability is maybe one in a billion, or are there more than 8 royals eligible for marriage out there today? Not that we know of. Or better put, not that our western, predominantly white or white-influenced society knows of. There are a lot of other royals all over the world that we don’t know or talk about. When was the last time you’ve read anything on King Letsie III of the Kingdom of Lesotho in South Africa?

Back to our European royals. We love gossiping about them, finding out their flaws, printing them all over the newspapers or showing them on some news show when we have nothing important to say. They’re among the best fillers, because we can praise them one day and denigrate them the other, as time and tone requires. They haven’t actually done anything to deserve their privilege, they were born with it. Sounds familiar?

"You've got to give something back. You can't just sit there." (Prince Harry)

So why choose one of them for a portrait52 portrait? On our first 52 list? What’s so special about this one?

First time I heard about Harry, as he prefers to be called nowadays, was in 1997, when his mother, Princess Diana, died in a car accident. You might remember that time, but you might as well be too young to have been aware of it back then. I felt a deep compassion for this child who had lost his mother and had to publicly express his grief about it. The perversion of the situation struck me: making money from a child’s grief by publicly displaying it in all sorts of media. I was disgusted. I decided to avoid tabloids completely and also try avoiding any celebrity news whenever possible.

I couldn’t, of course. Not altogether. I saw Harry again and again, partying, running around naked in a Hollywood penthouse, with only a hat on, hitting the headlines with his many blonde lookalike flings. But also serving his country as an army helicopter pilot, doing charity work, as part of his royal duties, but also because he meant it. So far so unspectacular.

Until he and Meghan Marble got engaged. And then married. Defying all the concepts of how and whom a British royal had to marry. Making the strongest statement against racism among all the European monarchies. And eventually giving up that extra privilege he had received at birth, to point out that nothing in this world is stronger than love. I think most people can’t grasp the kind of pressure he was under all this time, and how important these decisions he took were for him and his family. Talking about impressive personal growth. That’s got portrait52 written all over it.

"We believe we have to remodel the architecture of our online community in a way defined more by compassion than hate; by truth instead of misinformation; by equity and inclusiveness instead of injustice and fearmongering; by free, rather than weaponized, speech." (Prince Harry)

But that’s not it. At the beginning of August this year, Fast Company published an article Harry wrote about the toxic environment of social media and how we can work together to change it. How today’s online cancellation culture can affect young generations directly involved in the narrative. It touched me, and it put him on the list.

Sunday’s portrait will close the circle. Well, the first circle. It’ll open a new one, where we will need your help to revolutionize the social media landscape, to be nicer to each other and lift each other up. Can we do it? I certainly hope so.