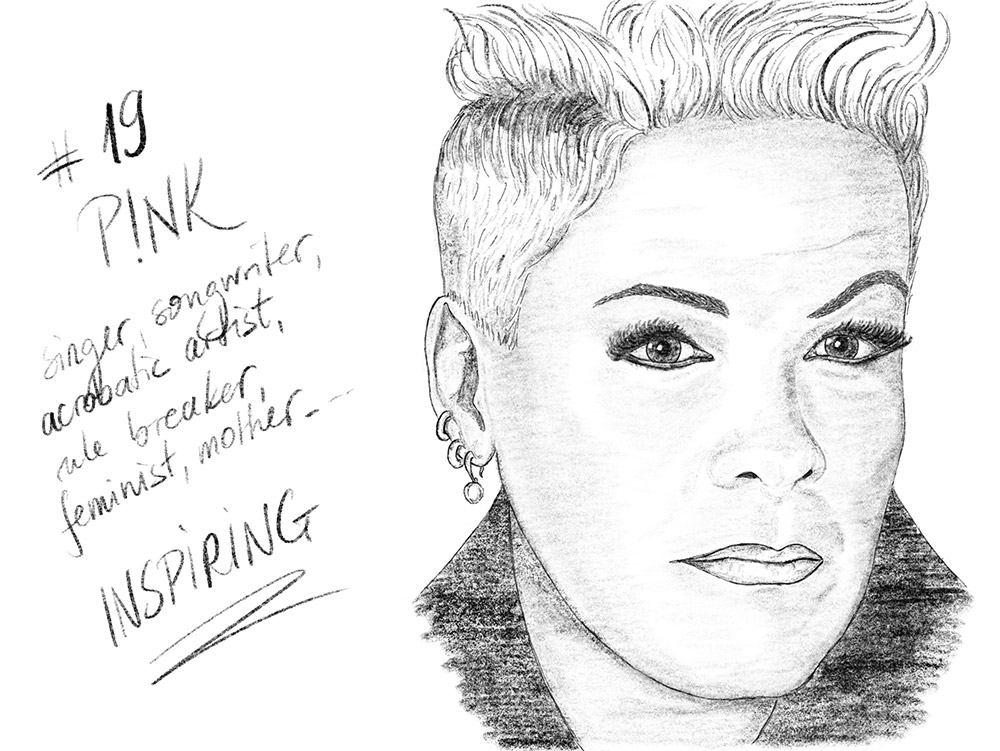 It’s time to get this party started, portrayers! Today we’re writing about the one and only, uniquely awesome Alecia Beth Moore, better known as Pink. Or P!nk, but for the sake of the textflow I’ll stick with Pink. This woman has surprised, impressed and inspired me so much during the last twenty years, that I had to ask my friends and partners in crime for their input to this portrait by telling you what they liked about her.

“I know my strong points: I work hard, I have talent, I’m funny and I’m a good person.” (Pink)

Chris: Pink is a power woman, she always states her opinions loudly. She has no inhibitions about polarizing, she owns her opinions and she acts on them. She is a tough woman, but she is only tough on the outside and soft on the inside. She is a family person and very down-to-earth actually. And she stands for what’s right. These are things I’m working on adopting for myself.

“You can’t move mountains by whispering at them.” (Pink)

Diana: I loved Pink from the beginning. She was different, she looked different, she sang differently, and she didn’t try to fit in. She just did her thing and stayed true to herself. I admired that about her. Along her career she changed from being an outsider, even if a successful one, to a woman who cannot be ignored, whether you like her or not. She talks about unpopular topics publicly and she doesn’t give a shit if that harms her career or her image. She puts her heart and soul in bringing attention to these topics and she doesn’t care about the consequences when she stands for something. This is also the way she behaves when educating her children. She puts in all her power and her love to be able to give her children the freedom they need to become self-confident and develop their personalities. If they want to shave their heads, they can shave their heads, they can have their own experiences. It took me a while to figure out how I can go this way, but in the meantime I can also talk about difficult things and stand for my decisions. Although it’s still very hard for me, I try not to avoid confrontations, I state my beliefs and act on my values. It’s a process, and Pink has inspired me to start it.

“Once you figure out what respect tastes like, it tastes better than attention. But you have to get there.” (Pink)

Maddie: In 2001 when “Get the Party Started” played on the radio all the time I was 10 years old and a huge Eminem fan. I remember my enthusiastic female schoolmates and that it suddenly became a normal thing for girls to have short hair! I have to add that I was raised in a village in the most rural part of Upper Bavaria. I somehow missed Pink’s artistic development because I wasn’t much of a radio listener. But Alice and Diana stirred my interest for her. We went on a 2-hour-long trip shortly after they had been to a Pink concert and we listened to her songs. The two were so full of excitement, it was contagious. It’s worth looking into what this woman has achieved in her over 20-year-long career. She can motivate us all to work on ourselves and try to achieve greater things.

Alice: I don’t have to add much to the above, maybe just a few words. I wasn’t a fan of the music Pink made at the beginning of her career (I’m really a huge fan by now), but I loved the way she stood for her convictions from an early age. She has stayed the same at the core of her being. But she has developed into one of the strongest and most influential people I know. She has managed to always choose the right side along the way. And she keeps me thinking.