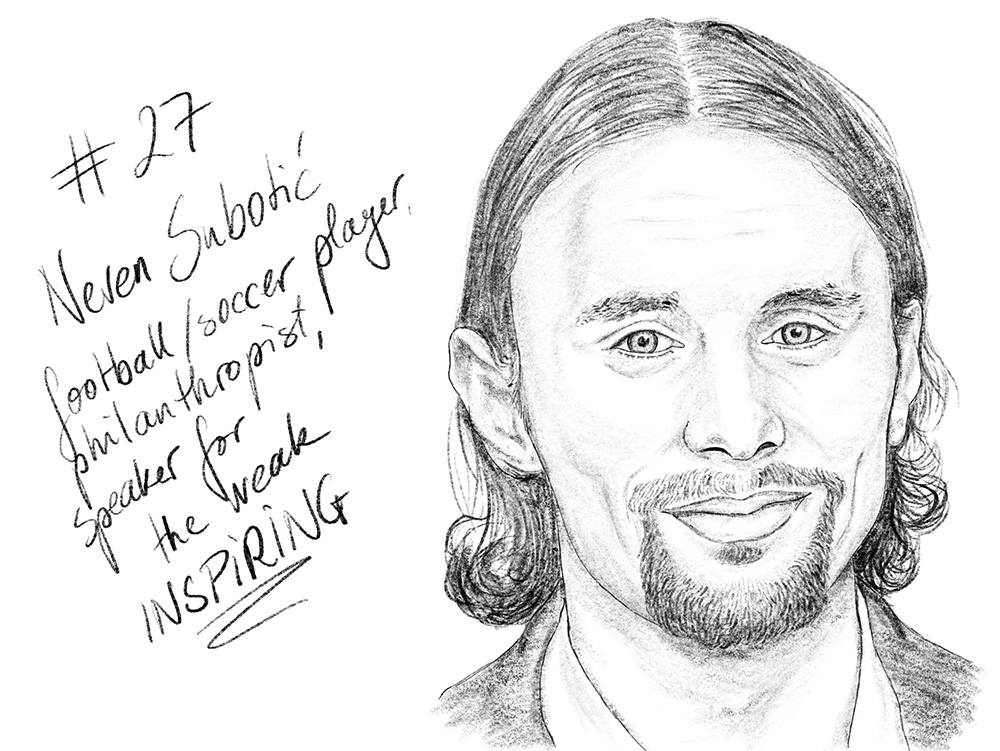 My father-in-law asked me about two moths ago when I intended to make a portrait about someone in the sports world. „You can take Neven Subotic, he is a very cool guy. I saw him in an interview last night, he was very impressive. All these other egocentric athletes should follow his example.“

„Those who have the support of family, friends or a fulfilling task are more resilient.“ (Neven Subotic)

Yesterday I had a lively conversation with a working colleague, Nico - he’s more than half my age, I think he’s about 18. We talked about soccer players and their role in our society. Nico is a BIG soccer fan, and I couldn’t stop myself from stating some provoking opinions about how soccer players don’t use their influence enough to turn things in the right direction. Here’s the gist of our conversation, as I can’t reproduce all of it.

Alice: „What do you think about famous soccer players and their role model function?“

Nico: „I think that soccer players are indeed very influencial, because they are watched, loved, and looked up to by millions of young people. Especially nowadays, when we can feel a right wind blowing through our society, politically speaking. It’s very important for them to speak up against racism, against right wing thoughts and behavior. Leon Goretzka, for example, talks very openly against racism and fights actively this very concerning situation. The UEFA started the ‚No to Racism‘ campaign some years ago.“

„You come into a team as the youngster and you do what the older team mates do. A house, cars, parties - today I can laugh about it.“ (Neven Subotic)

Alice: „Goretzka is but one example. Do you think that most soccer players are like him, that they are good role models? Shouldn’t they use their influence more, make media appearances, get involved in communities? I know that Boateng has his own clothes line, and that he loves being stylish, but I wouldn’t have known anything about his social engagement if I hadn’t googled it for this blog. Or Marco Reus. He was caught speeding, and the police found out that he hadn’t even had a driver’s license. What kind of signal does this behavior send?“

„I have a monthly pass and I’m very satisfied with it.“ (Neven Subotic about taking the subway)

Nico: „You’re right, Reus shouldn’t have driven without a license, that’s wrong, because he doesn’t stand above us normal people. But the other thing with the media appearances to promote social engagement is difficult in a soccer player’s life. This is a 24/7 job, training, games, training, more games, training… They have to rest as well, they don’t have much time for these media encounters.“

There was more to the conversation then this, and Nico was very well informed and eloquent, also very passionate and emotional. When I asked him about Neven Subotic, today’s actual portrait, he became even more emotional. He said he didn’t like him and pointed out an incident when Subotic behaved unacceptably in the field. Yet he didn’t know what Subotic has been doing for many years in his actual life.

„Many of the top earning professional soccer players feel they live in a material excess, which doesn’t influence their personal happiness. But most of them go no step further.“ (Neven Subotic)

Neven’s social engagement goes beyond what most of his rich colleagues do to give back to the communities they come from. He speaks up for the less fortunate and points out the abuses suffered by half the world, so that the other half can live in abundance. He’s criticism is always constructive, he always looks for solutions and leads by example. He sold his cars and his house to start a foundation that makes water wells in Ethiopia, in regions where most people don’t have access to water. The money he earns from playing soccer he spends almost entirely on the administrative expenses of his foundation, so that all donations can go directly to where they are needed.

Nico didn’t know anything about all of this. He only knew that Subotic had behaved badly on the field eight years ago. I don’t blame him. He’s very young, and supporting his team is more important to him than learning about a player’s social engagement. But soccer is not a 24/7 job, and there should always be time for players to become active and take a stand publicly and loudly. Because there are more than four billion soccer fans out there and they all contribute to these players’s success. Many of these fans experience social and economical injustices on a daily basis. Wouldn’t it be great if the soccer world paid them back a bit? Like Neven does.