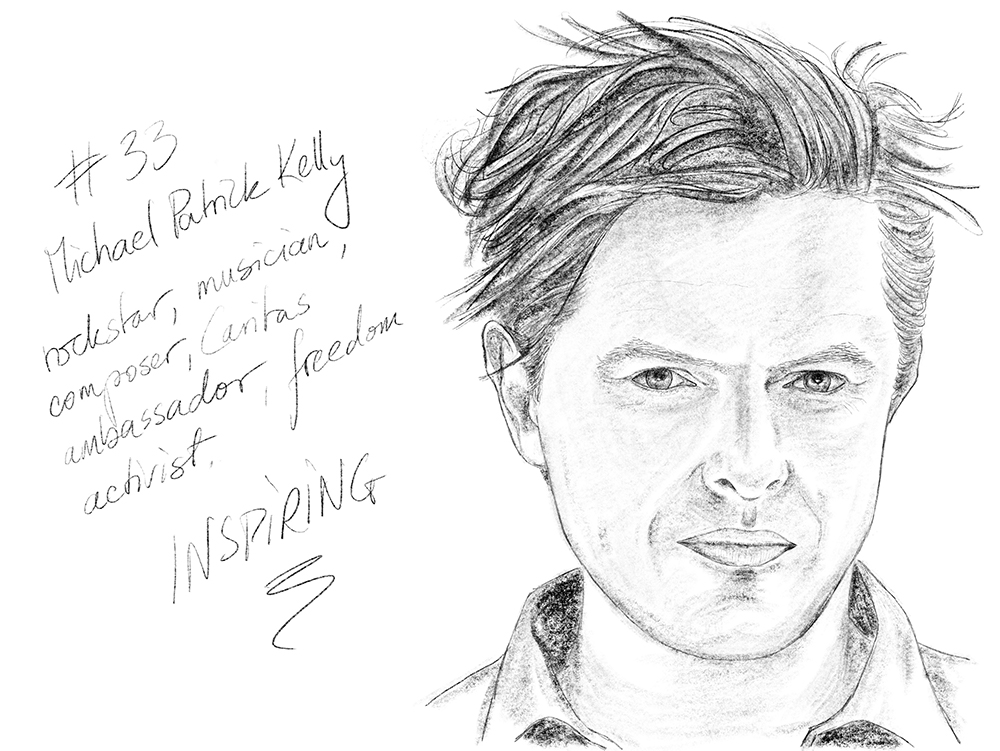 Has any of you ever heard of the Kelly Family? If you’re over 35 like me, you might have known of the original bunch back in the nineties. If you’re younger, you might have heard of them from your parents. I won’t go Wikipedia on you about who they were / are, it’s enough to say they were a famous family of musicians and used to fill stadiums at their concerts. I was a fan as a kid.

But I’m not going to talk about them, because there is only one Kelly that made it to the portrait52 list so far. I met Michael Patrick Kelly in person about one and a half years ago at work. He was about to celebrate a huge comeback as a solo artist. I didn’t know much about him, but I recognized him from a picture my friend Ramona (the one from portrait number 12) had shown me just a few days before, taken at one of his concerts. His shyness and humbleness surprised me. When I helped him with his problem, he was incredibly grateful. Not what one would usually expect from a rockstar.

"Music is a heartbeat that never stops, beauty that never fades, a friend that’s always there when you need one, a lover that never leaves." (Michael Patrick Kelly)

Michael Patrick Kelly was a superstar at 16. At the age of 18 he took over the artistic direction of the Kelly Family shows, he wrote songs and managed the band. He was a musician through and through, even at that young age, but he had to take a lot of responsibility he hadn’t asked for. During the concerts on stage, whenever he started singing, all the teenie girls in the crowd started screeching and screaming so loud that no one could hear anything anymore. This is firsthand information, as Ramona used to go to a lot of the Kelly concerts as a teen.

Imagine you burn for something, that something is your calling, and you get to do what you burn for to earn your living. But when you do it, no one really listens or watches, because it’s not about what you do, but about what you represent for the person you do it for. Which is not what you want to represent. You go on doing what’s you’re doing because maybe one day it will make sense. It didn’t make sense to Michael Kelly, but instead it brought him on the edge of destruction.

"It is my duty as a musician to pass on what I have received." (Michael Patrick Kelly)

This story is not unique, you may have heard or read it before concerning another artist. What is unique about it is the way Michael dealt with it. When he decided not to end his life, he knew only a harsh cut would free him from the life he’d had. He was 27 years old when he joined a monastery, turning his back on almost everything that had made up his life until that point. He studied theology and philosophy during his time in the monastery, but he couldn’t give up singing. So after six years as a monk he came back, this time entirely on his terms.

I may have felt a certain connection to him and that’s probably why I put him on the list of the first 52. Breaking up with one’s family is extremely hard, but sometimes it’s the only way to go. I admire his determination and his strength to do what was the right thing for himself. Even if that meant completely giving up the life he’d had. In the end, he managed to become the musician he always wanted to be, humble and grateful, and also to be perceived as such.