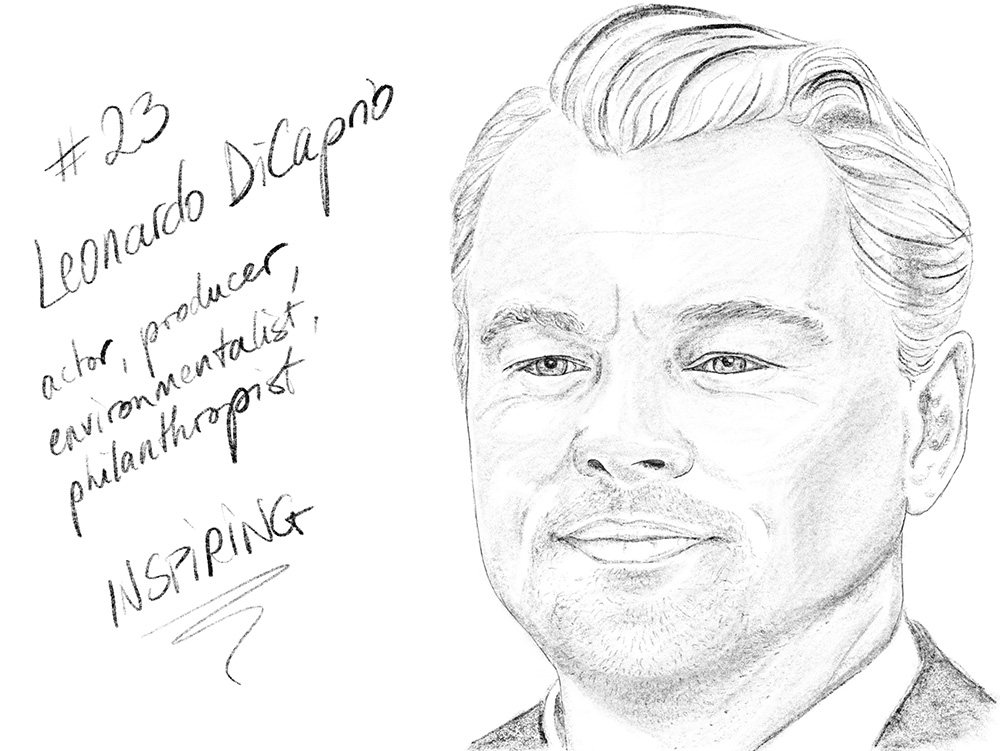 You can call Leonardo DiCaprio one of the best known and best paid actors of our times, an Oscar winner or a serial top models dater. He is all of these things. Most often he makes it to the headlines in one of these capacities. Much acclaimed or much criticized. Rarely in between. I wasn’t a fan for a long time, although I loved some of his roles. But the spark just didn’t seem to catch.

“Women have been the most persecuted people throughout all of recorded history, more than any race or religion.” (Leonardo DiCaprio)

Until last year, when Chris and I were brainstorming about male role model figures for portrait52. I love women, most of the things I know I’ve learned from women. They don’t conduct wars, although along history (which so far has been written by men), quite a few of them were blamed for being the reason man started wars. Most of them keep their egos in check and don’t feel the need to prove they are superior. On the other hand, most dictators, despots, or power greedy heads of states are men. More often than not, the men in my life tended to disappoint. Like when my father promised to help me with my homework, but then got drunk instead. On repeat. Or when my brother didn’t take me to play soccer with his friends anymore when I started to look like a girl. Or when my math teacher from high school marked my paper with an F. OK, I’m probably biased.

I was shocked that I couldn’t come up with an equal number of inspiring men when I started my portrait52 list. Which is not a bad thing per se, women tend to look up to women and men to men. But I wanted to make it a fair list. To show the world that we can be equally cool. That’s why I didn’t say anything when Chris chose Leo, because I didn’t want to sound shallow. I have to admit, I had judged him by the headlines. One model here, one young actress there, another model just a few months later… I went to Wikipedia to fill my knowledge gap.

“I play fictitious characters often solving fictitious problems. I believe mankind has looked at climate change in the same way, as if it were fiction.” (Leonardo DiCaprio)

Leonardo DiCaprio founded his foundation for promoting environmental awareness in 1998. Quick calculation on the side: that was 22 years ago (in your face, high school math teacher! I always knew I didn’t deserve that F). If my math is correct, and it is, this amazing guy has been fighting for our environment for half of his life! And still found the time to play in countless movies and date a dozen or so models in the meantime! People criticized him for getting to climate summits in his private jet. Well, I’m not going to say that’s ok, or that it isn’t. I don’t want to be the judge of that. I prefer to point out everything he does for the environment, like driving e-cars, looking for solutions and investing his time, his money and his status to support environmental causes. He genuinely loves this planet, private jet or not.

Oh, one more thing: this year he donated 3 million dollars to Australia bushfire relief efforts. Yes, he has the money, but a lot of people have it, and they don’t donate 3 mill to help protect and save Australia’s nature and wildlife.

If you want to do so as well, you can! Join our February challenge on helping Australia’s wildlife and get the chance to win one of five cute koala t-shirts. These will also be the first t-shirts we make that are more than just prototypes, so it will be a historical moment for portrait52 as well.

“Raising awareness on the most pressing environmental issues of our time is more important than ever.” (Leonardo DiCaprio)