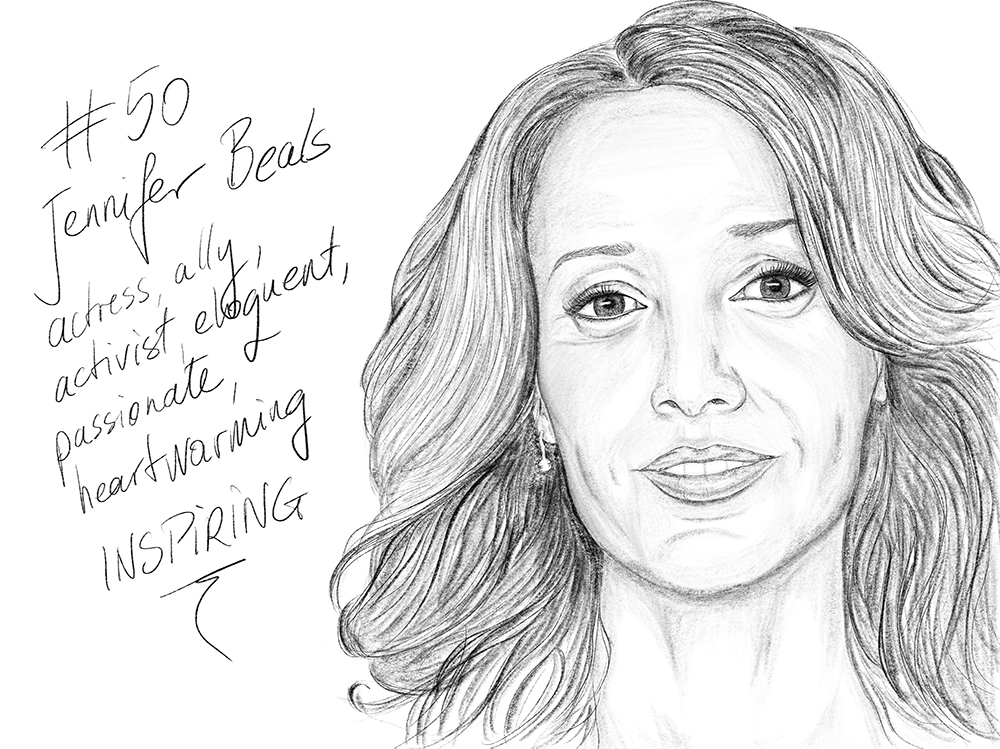 This woman has written LGBTQ+ history, particularly lesbian history, and she isn‘t even gay. Thousands of women around the world adore her, my wife included. Therefore it was an obvious choice for her to include Jennifer Beals on our portrait52 list. Let‘s check out why.

"Love is by it’s very nature sacred and therefore powerful in ways we can only imagine. When we acknowledge our love for ourselves, our beloved, for this beautiful and complex world we live in, we realize we cannot silence ourselves for anyone or any government that would seek to quite or diminish us and the love that anyone of us seeks to express." (Jennifer Beals)

Alice: When did you discover Jennifer Beals?

Diana: My first contact with her was in the L-Word series, the one and only lesbian television series. I think it came out on the German market in 2004, a time when I was very heartbroken. So I watched the show, like every lesbian, and I soon had a serious crush on Jennifer. First of all on her character, Bette Porter, but also in the actress. She was so gorgeous, so beautiful. But that wasn’t the only reason. I’m also an actress, and I wanted to know why I was so fascinated by her, so I watched her from an acting perspective. The way she played the role, she lived the role. And that made me feel even more enthusiastic about her. I found it incredible what an acting talent she had and still has. You can see everything in her eyes and on her face, she doesn’t have to say or do anything, you see it in her eyes if she is happy, or sad, or if her heart is just breaking. I was lost. Hopelessly lost.

Diana: Shame in you!

Alice: It wasn’t my type of show, all that drama. But I found the series groundbreaking, and I found it fascinating how long it survived, compared to all the other relationship shows. I found it very important that such a series was introduced in television and that it could compete with the similar series from the heterosexual world of that time. Six seasons was a long time.

Diana: Yes, it was so revolutionary, you could say. We’d never had anything like it before, or after, for that matter. Later on I found out that she isn’t even gay. She was a well known star after Flashdance, and I thought it was very courageous of her to play this part, because she didn’t care what it would do to her career. She loved the challenge and found this topic so important that she really felt the need to play this part, to put the focus on the LGBT community, to bring visibility and representation into television.

"Love is both sword and shield." (Jennifer Beals)

Diana: And it’s not only the way she played Bette Porter. She’s is such an amazing person. She supports the LGBTQ+ community with such dedication. No matter where she is, what event she’s on, she talks as if she were one of us. She fights for our representation and against discrimination of LGBTQ+ people. And ten years after the original L-Word series, time in which nothing else happened in this direction on tv, she decided, with Kate and Leisha, to make a new L-Word series and keep the conversation going, fire it up again, to fight this tsunami of hate and bigotry that is raging all over the world right now. And this moves me. A lot. And it’s not just our community, whatever her values, she stands for them. Publicly. She uses her voice, her celebrity status, to fight for women, for the environment, for BlackLivesMatter, against any kind of discrimination. That’s why she’s also on my bucket list for people I want to photograph, on the very top of it.

"Love is the greatest light, the brightest torch, and will always be the greatest instrument of change." (Jennifer Beals)

There it is, portrait no. 50, the exceptionally beautiful, engaged, determined Jennifer Beals. I’ve got a crush on her now as well, even if I’m still not a big fan of the show just yet.