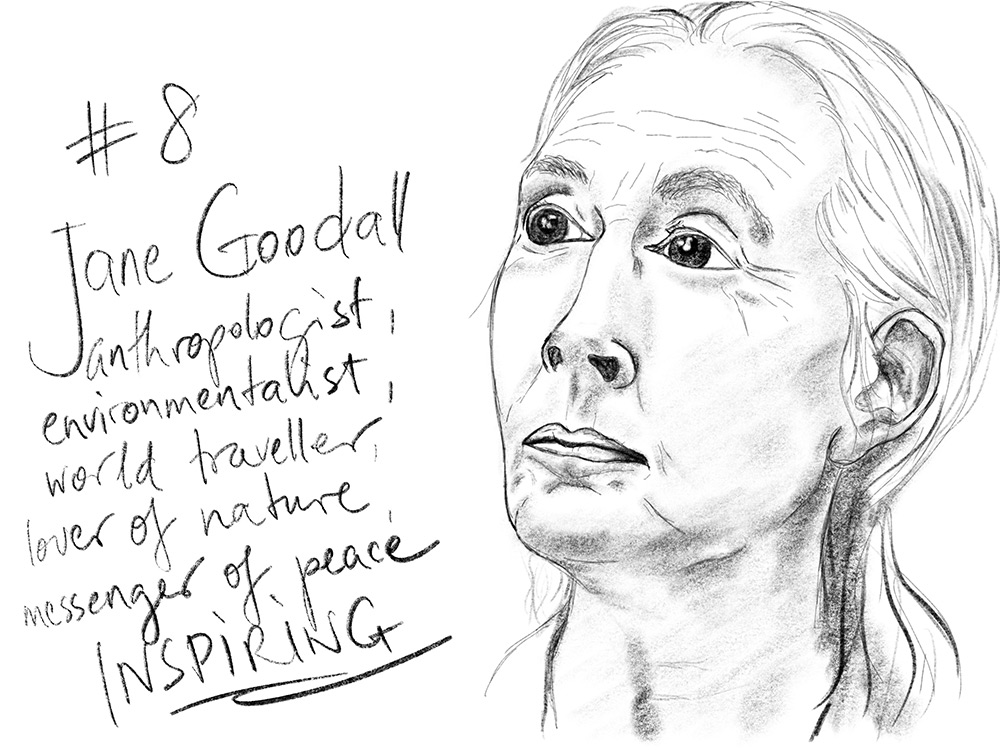 I’m so excited about this week’s portrait! When I first talked to Chris about the portrait52 project, he said without hesitation: “The first person on my list is Jane Goodall!” I was a bit jealous that I hadn’t thought of her, but I was very happy Chris put this tireless activist on our first 52 list. Here’s a bit of insight in our co-founder’s life and mind.

Alice: “Tell me what put Jane Goodall at the top of your list.”

Chris: “She is my number one because she is the first person I thought of as inspiring. I can’t remember exactly how I discovered her, I think I saw her on TV. I was about fifteen or sixteen.  And I heard that her movie was out. I wanted to see it but I could find absolutely no one who would join me. So I went to the cinema to see it by myself. It was an afternoon and the “Kochel Cinema Club” was in the cinema. It was quite funny, because as the film started, we thought it must be in Chinese or something, because the language sounded so strange. And we thought: Something must be wrong here. I have to add that the Kochel cinema still used film rolls. The technician started the roll from the end, that’s why we saw the film running backwards. He apologized and rewound the roll. It took him about fifteen minutes and in the meantime the grandmas from the club fed me cookies. Then the film started and there I was in the middle of these sweet old ladies, eating cookies and translating the film for the members of the Kochel Cinema Club. When I left the cinema I just thought, wow, this is a truly inspiring person!”

“We haven’t borrowed anything from our children. When you borrow, you expect to pay back. We’ve stolen, we’re still stealing and we’ve got to do something about it.” (Jane Goodall)

Chris: “I went home and wrote these words on my school folder, that’s how much she impressed me.”

Alice: “Has this movies changed you or your behavior in any way?”

Chris: “I can’t say if it changed my behavior, but it definitely changed the way I think. Often when I hear people talk, I can’t help thinking how ignorant they are... what boneheads they can be. And it’s so bad, I really think this just can’t be real... And I think this is what this movie, what Jane accomplished, she changed my view of our world. What impressed me the most was that she was just a secretary in an office. And his boss said he needed someone to go to the jungle and watch the chimpanzees. And she said she didn’t have any training or qualification for that, but her boss said he didn’t need someone with a degree, he needed someone with a fast grasp of things, someone who could learn fast and had courage. She managed to gather so many insights so fast. She understood that she had to bring this knowledge to the world and she started doing that. I found that incredibly inspiring. Everybody had thought that we humans were the toolmakers, the only creatures who used tools to solve problems, but she observed the chimpanzees doing just that. So either were the chimpanzees humans as well or we had to change our definitions.”

“If we are arguably the most intellectual creature that’s ever walked on the planet, how come we are destroying that planet? How come we’re destroying our only home?” (Jane Goodall)

Alice: “What do you think that we can do to support Jane Goodall and her mission with portrait52?”

Chris: “I think it’s what we're already doing. It’s spreading the message. What happened to me in the cinema is exactly what we want to show to the world. And also live our lives accordingly. Sometimes this is all the support that a cause needs.”

“What you do makes a difference, and you’ve got to decide what kind of difference you want to make.” (Jane Goodall)