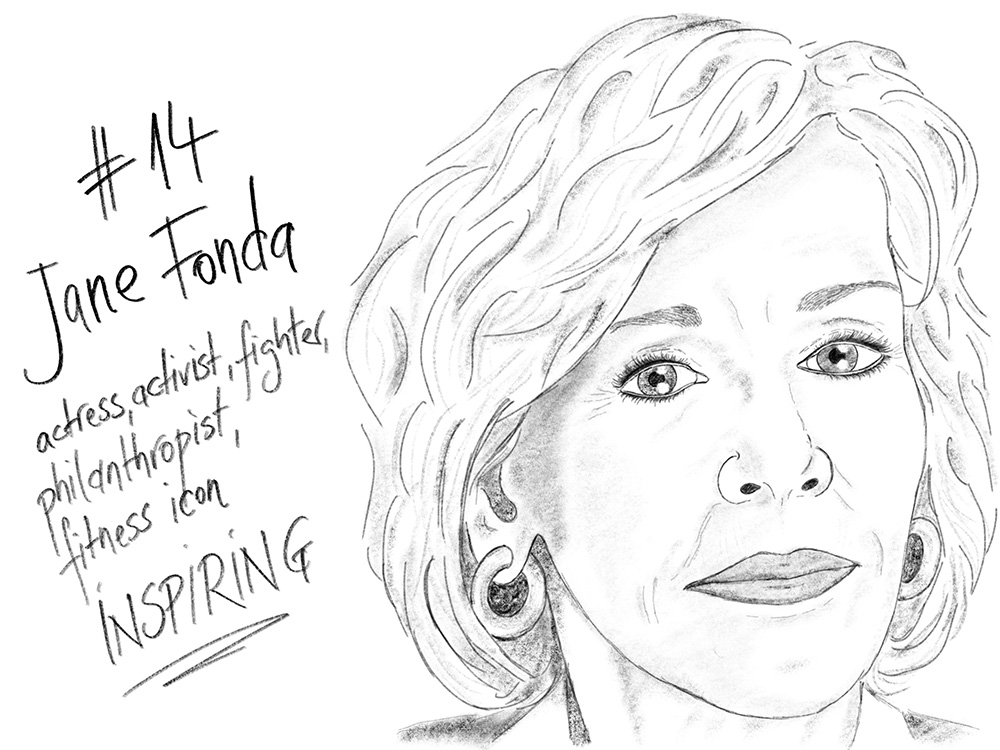 This woman blew my mind!

I grew up surrounded by strong women like my mother, or many of my teachers, I’ve been spoiled with quite a few terrific role models. It’s a privilege few women have, unfortunately, even now, with the second decade of the 21st century coming to an end. When Diana told me she wanted Jane Fonda on our portrait52 list, I smiled, thinking we already had so many truly inspiring people to choose from, Katharine Hepburn being one of them. An actress already, record holding Oscar award winner. How could anybody compete with that? I’d never thought of Jane Fonda as a “strong woman”, let alone one of the first 52 portraits. But I’d also never known anything about this magnificent human being, as it turned out.

Here’s a short intermezzo. Last year we spent a wonderful holiday in Mexico and met a group of friendly, delightful Americans, most of them already in their well-deserved retirement. We talked about our lives and about current projects, so I told them about portrait52 and what it was all about. When Diana mentioned how much she liked Jane Fonda and that she wanted her on the list, one of the men said in a resentful tone: “We older Americans spit on her, she is a traitor!” It was obviously a very sensitive topic, and we didn’t talk about it anymore. When we returned to Germany I told Diana I would make the portrait after the crowdfunding, as I thought of the support we could get from these nice Americans we kept in touch with. She was very disappointed, but told me she could understand my reasoning.

“You can do one of two things: just shut up, which is something I don't find easy, or learn an awful lot very fast, which is what I tried to do.” (Jane Fonda)

Still I wanted to know what this traitor story was all about, and I started to read more about Jane Fonda. What I found out made me feel ashamed of even taking into consideration the idea described above. It made me cry with remorse, compassion and awe for this woman who has since climbed to the top of my list of inspiring people. I’m not hyperbolizing here for the sake of rhetoric, I actually cried when I read her blog about how her fight for peace almost destroyed her life.

What makes her so special among all these other incredible women that change our lives every day? It’s a mix of vulnerability and fierceness, of confidence and doubt, but most of all of absolute determination and awareness for the pressing topics of our time. She doesn’t fight on one or two fronts, she fights on as many fronts as she can, because let’s face it, they’re a lot. She’s made mistakes and has apologized for them, but she has never stopped helping those in need or fighting for the causes she believes in.

“To be a revolutionary you have to be a human being. You have to care about people who have no power.” (Jane Fonda)

She is a revolutionary through and through, and manages to be one with impressive gracefulness. I’m so grateful for Diana’s choice, as I have learned so much and I’m still learning from this strong woman every single day. And as for our American friends, I hope they will make an honest and informed decision when I ask for their support.

Check out Jane Fonda’s blog and Instagram account for all stories related to her life and her activism.

“I have a confidence about my life that comes from standing tall on my own two feet.” (Jane Fonda)