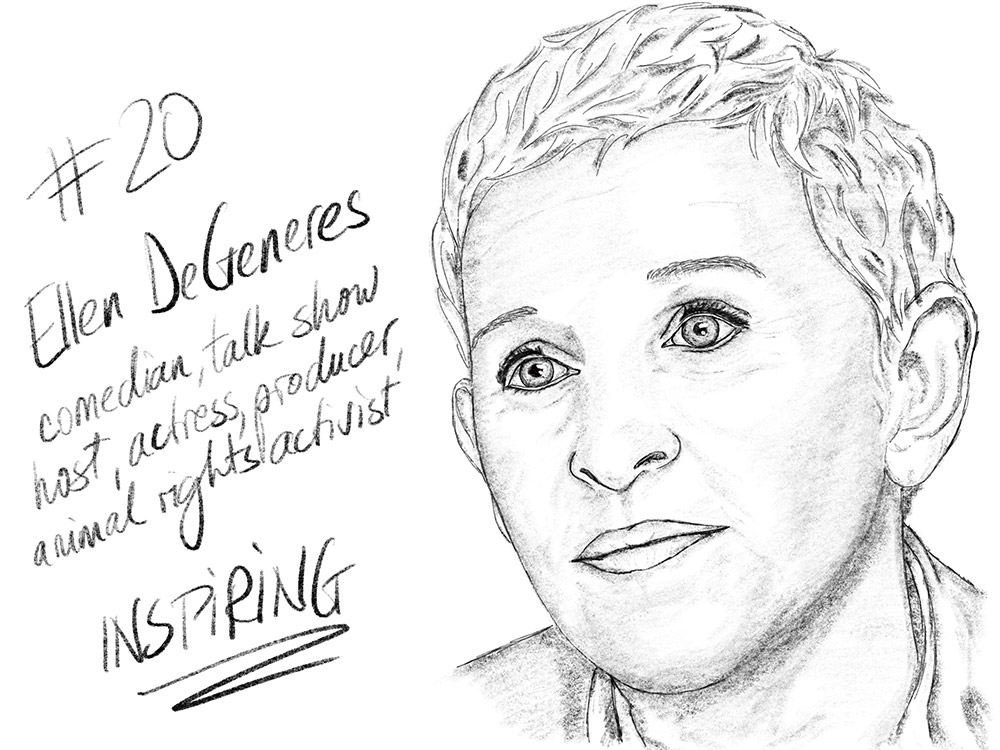 “Things will get easier, people's minds will change, and you should be alive to see it.” (Ellen DeGeneres)

I was in my early twenties when I started coming out to my friends and a small part of my family. It was the turn of the century and everybody was hoping for fresh, modern times. For more understanding, tolerance and acceptance. All these things had started to trickle into my life, but in Romania of that time resistance was high. It was a difficult time for me, as it still is for thousands and thousands of gay people all over the world. One person who inspired me to stay on track and trust my environment was Ellen DeGeneres. But don’t worry, today it’s not about me, it’s about Janik, a young friend of mine, and how Ellen inspired him in his own personal development.

“Follow your passion. Stay true to yourself. Never follow someone else's path unless you're in the woods and you're lost and you see a path.” (Ellen DeGeneres)

Alice: Janik, tell me a bit about yourself and what you do.

Janik: Sure. I’m 20 years old and live here in Munich. A while ago I started producing a lot of content for Instagram, I immersed myself in the Instagram world very fast. I practically grew up with it, I’m the Instagram generation, so to speak. I love creating content, making photos, editing them, posting them, growing my range, reaching more and more people through Instagram. I’m also an actor for film and television, and this is where I want to make the most progress because it’s my biggest passion. It’s so much fun being an actor, because you can adopt different roles all the time. It’s not just about becoming famous and earning money, at the beginning that isn’t even a consideration, it’s about expression one’s passion. You can express what you feel and what is going on inside you through these different roles.

Janik: When I discovered Ellen I was relatively young (side note: he is twenty, age is relative). I was 13 or 14 and I used to watch her show on YouTube. First it was just for entertainment, because that was the only thing I was interested in at that time. I watched her how she entertained people and made them happy by giving them presents or vouchers or other stuff. I discovered only a short while ago that she is more than just an entertainer. She has a huge story to share. So I started watching her in interviews and on stage and she’s become an inspiration for me.

“Beauty is about being comfortable in your own skin. It's about knowing and accepting who you are.” (Ellen DeGeneres)

Alice: what is it that inspires you about her story.

Janik: The story as a whole. I found it inspiring that she started her own standup comedy show at a relatively young age. She turned to television soon after, so I can relate with her in this respect. She became very successful until she had her coming out. And coming out stories are also something I can relate to. She was then kicked out of television because she had the courage to come out, people didn’t book her anymore. But a few years later she got her own show, which she still does, very successfully. This is what I find so inspiring. She has bounced back from every failure, she goes on doing her thing, no matter who or what gets in her way. She does what makes her happy, and she is honest to herself. She knows who she is, what she can do and she knows that those people who can’t appreciate that shouldn’t be a part of her environment. This is something not many people can do and it’s what impressed me the most about her. She loves herself the way she is, 100%.

“My life is perfect even when it's not.” (Ellen DeGeneres)

Alice: How did you change because of the way Ellen inspires you?

Janik: I’ve become quite open through her, I can now openly talk about who I am, I’ve learned that I don’t have to hide or hold back with what I feel or what I have to say. I can put it out there, in a respectful way. Especially with regard to coming out, to being gay, being part of the LGBTQ+ community. I’ve learned through her that it shouldn’t be a tabu topic, that’s good to talk about it openly, and we should talk about it. And we can talk about it without the fear of ruining our chances or our future. This has definitely changed with me. I talk more about my sexuality, openly, I make jokes about myself sometimes. And I’ve learned that I have to hold on tho things I really want to do and try doing them, whatever it takes.