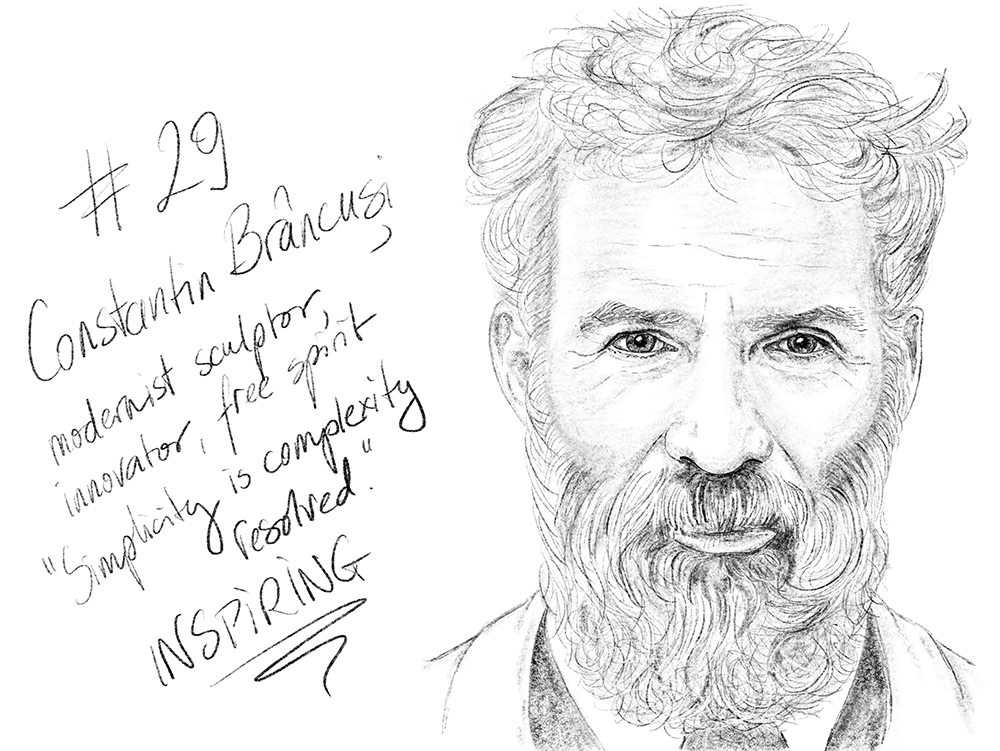 I’m always excited when I write a new portrait blog, but today my excitement is off the charts! Seriously. I adore this man. The fact that he’s Romanian, is, well, it’s a bonus, I have to admit. Romania is a small country, and my countrymen often have a bad reputation. I’ve been through a few unpleasant situations myself  because of my birth background.

My infatuation with Brâncuși is not a unique phenomenon though. It runs in the family. My mother was the first to fall in love with him and his work. I was about 10 when I first saw a photo of her sitting at “The Table of Silence” in Târgu Jiu, one of three sculptures Brâncuși made for the city. She told me about the power and reverence she felt there. And about what a great man he was, a real man. Back then (shortly before the fall of the Iron Curtain) being a real man seemed to be something all women wished for in their husbands, but never really got it.

“To see far is one thing, going there is another.” (Constantin Brancusi)

Back to Brâncuși. I asked one of my best friends, who also adores him, to tell me why she loves him and his work so much. Here’s what she wrote to me.

“Brâncuși is #forever. Most of the joy I've learned in my life was from three main sources: 1) my dogs, 2) James Joyce, 3) Brâncuși - first from his writings,  and then from his sculptures, which I hunt down in museums all over the world.

This is what I like about the man. He was happy and wise. He said about his work: ‘Don't look for mysteries. I give you pure joy’. He walked on foot from Târgu Jiu to Paris. The way he dressed (google it!!!). He was accepted in Rodin's studio but left soon saying that ‘nothing grows in the shade of tall trees’. He had torrid love affairs with Maria Tănase & Peggy Guggenheim. Frank Gehry said about him: ‘Brâncuși had more influence on my work than most architects’.

What i like about his sculptures: his radical simplification of forms; his predilection for bold verticality, stacking on a vertical axis, ‘advancing toward the divine’ as he put it; his quest for infinite space; his sculptural luminosity - he used to polish his metal sculptures compulsively in search for an inner light.”

“Simplicity is not an objective in art, but one achieves simplicity despite one’s self by entering into the real sense of things.” (Constantin Brancusi)

I couldn’t say it better myself. I literally couldn’t, that’s why I asked my friend to do it. I can’t talk about art that way, but I can feel it. When I stand before one of Brâncuși’s perfectly polished sculptures, my eyes widen and my mouth instinctively forms into a big happy smile. I feel a tingling rush running through my body and my heart beats faster. I’m not kidding, this is my body’s reaction to these perfect combinations of form and material. Brâncuși worked like a slave and created like a god. It’s the only way one can cause such reactions with his work.

As for the ‘command like a king’ part of the quote, there’s this hilarious anecdote about him and Rockefeller, who was a great admirer of his art. When Rockefeller visited Constantin Brâncuși in his studio, he asked the artist what he could do for him, maybe buy him some furniture or something. Brâncuși answered him: “Pick up the broom and sweep through.” Mike drop.

“Theories are patterns without value. What counts is action.” (Constantin Brancusi)

Some facts and information to the name dropping:

Brâncuși left home at the age of 11. From that moment on he cared for himself his whole life.
The distance from Târgu Jiu (Romania) to Paris (France) is almost 2000 km. He walked almost the entire distance. He had to make stops on the way in order to earn money to sustain himself. He suffered illnesses and hunger along the way, most of the times he didn’t have any kind of shelter. But he made it.
He used to give the women sculptors who worked in his studio male names. He said one couldn’t reprimand women, and giving them male names made it easier. They didn’t like it.
Maria Tănase: famous Romanian folk singer.
Peggy Guggenheim: famous art patron, art lover and artist’s lover.
Frank Gehry: one of my favorite architects.
Rockefeller: yeah, it’s that Rockefeller, the first billionaire of mankind...