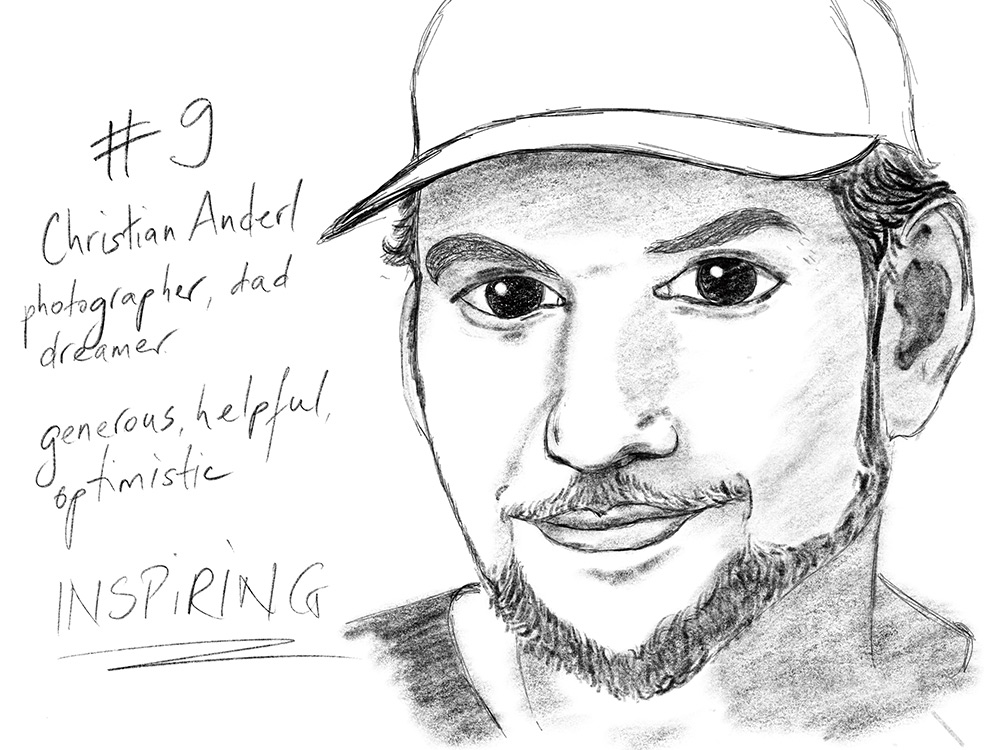 This week’s blog is a special one, because it’s the first blog about someone I personally know. And it’s my better half’s number one portrait.

Alice: How did you first find out about Christian Anderl?

Diana: It was at a photography fair in Köln (Cologne, Germany). Christian had a presentation about shooting professional portraits everywhere you are with only one flash, and I liked what he did and how he explained everything. I had fallen in love with photography as a child, but in time I came to repress this love. Until you gave me a camera ten years ago and I started shooting again. But I was always annoyed by the fact that I didn’t really understand how such a camera works. Because it’s always about the interaction between ISO, shutter speed and aperture, and these three things were a mystery to me. But nobody could really explain to me what they were and how they worked, so I always shot my photos on automatic mode. And it bugged me, because in my heart I was a photographer, but I had no idea how my tool actually worked. I wanted to be the one to determine how the photo would look like, not the automatic mode. One day I saw an ad for one of Christian’s courses. "If you really want to know how ISO, shutter speed and aperture work, this is the only photography course you’ll ever need! After this course you will master your camera and go out and take better photos!" There was also a community linked to the course, with people who had already taken one or more of Christian’c courses, so I thought it was a win-win situation, because I would have people I could ask questions about things I didn’t understand.

Alice: Did you understand everything he explained in the course?

Diana: I remember I was lying in bed when I took the course about aperture. It was a seven minute video, and I thought he would never be able to explain to me what aperture is in seven minutes. No youtube video and no photographer, hobby or professional, had managed to bring light on the topic before. I swear to you, after seven minutes my world had changed. It was as if a blind person saw colors for the first time. I understood everything he taught and I couldn’t believe how phenomenally well he could teach. And yes, when I finished the course I knew what ISO, shutter speed and aperture were and how they worked together.

Alice: Was it this experience that put Christian Anderl at the top of your list? I understand that helping you to master your camera and take control of your tools changed your life, but did you find this so inspiring that it actually motivated you to make changes in your life?

Diana: No, this wasn’t it. It was an extraordinary course, don’t get me wrong, but he would have been just another guy on the internet, who happened to teach extremely well. About two years ago he held a presentation about portrait shooting during a small photography fair in Basel (Switzerland). I went to see this presentation, because I thought I would be able to learn more, as I’ve always loved shooting portraits. The fair was very small, some local photography business had organized it, and we were only about twenty people who watched the presentation. So after the presentation Christian came to us and asked if we wanted to have coffee with him. I was quite impressed that this cool guy, who was a Canon ambassador, and a very well known photographer in Austria, took his time to have coffee with complete strangers, because they came to see him in Basel. It was then when he told me his story of how he became a photographer. He had been unhappy in his job and wanted to start a business as a photographer. He gave up his safe job and fought for his dream and never gave up. Although he was close to losing everything twice. He had had so many lows in his life, but he always fought and fought and managed to succeed in the end. And I thought, wow, he put all his eggs in one basket, and he was so close to lose everything, but in the end he succeeded.

Alice: So his story inspired you to start going after your own dream?

Diana: Yes. But he continues to be a constant inspiration for me. He thinks that there shouldn’t be any competition among people, that if we all help each other in a community, we can all succeed. After that encounter in Basel, he wrote me a few long messages, encouraging me to so more, to change my mindset and believe in myself. He didn’t have to do that, but he took his time to follow up and try to help me.

Alice: Tell me how this encounter and this relationship with Christian Anderl has changed your life.

Diana: Since this encounter, I started thinking that I could actually become a photographer one day, and I’ve been working toward this goal ever since. Also I’ve been working on myself, to change my mindset, to trust my skills and my talents more. I’ve become a wedding and portrait photographer, even if not full time. I’ve resigned my full time job this year and I finally have the courage to go my way and see what I can achieve in my life, not just concerning photography. Two years ago, he said I would have to jump. So this year I finally jumped and I allow myself to fly.