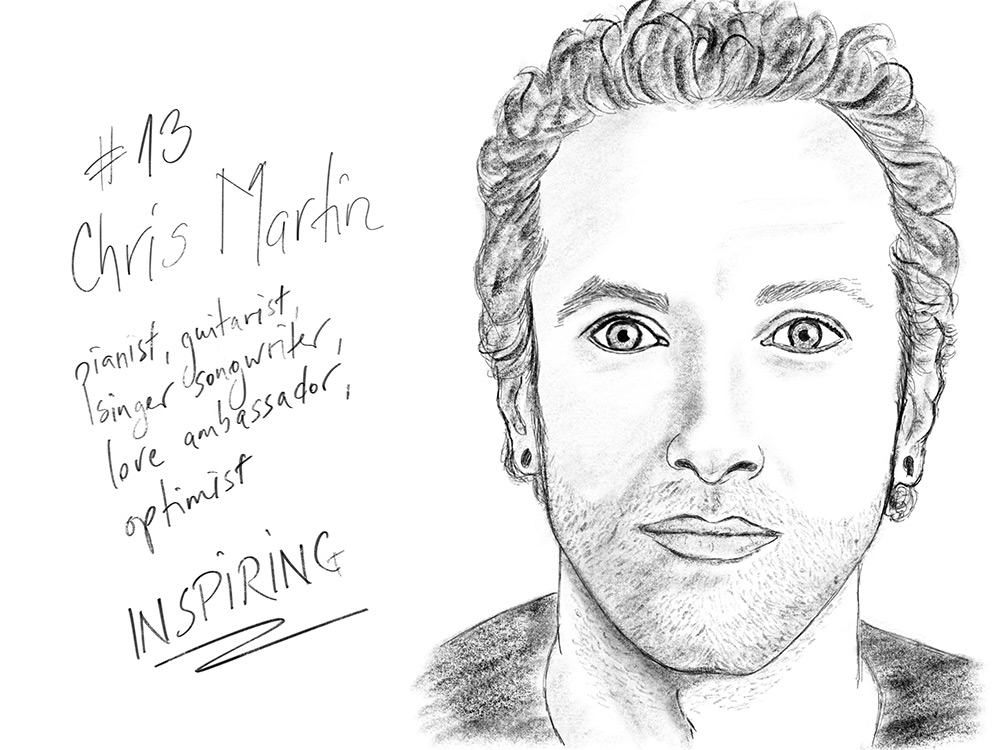 I’m quite excited about this portrait, as Chris Martin is the first musician so far. Music is vital to me, to most of us. I could live without a tv, without Netflix or YouTube, I have tested it for longer periods of time (like two or three weeks, that’s quite long, right?). I’ve had withdrawal syndroms, I admit, but I’ve managed to overcome them every time. What I haven’t managed until now is to be without music more than a day or two.

Maddie, our video editor, is a huge Chris Martin fan, and after this short interview, so am I.

“Life is beautiful in all it‘s colors, even the darker ones, they‘re here for a reason.” (Chris Martin)

Alice: How did you become such a big Chris Martin fan?

Maddie: It was in 2011 when I started getting to know Coldplay and Chris Martin. Until then I didn’t really like them, I found them somewhat artificial. I used to listen to music for the melody, not for the lyrics. But about that time I wasn’t feeling very well, I was sad a lot. My girlfriend back then was a big Coldplay fan, listening more to the lyrics, not so much to the melody. One day I joined her on one of their concerts, and during the concert I cried all the time. They were happy tears, I had forgotten what it meant to cry happy tears. I was happy all the time during the concert. That’s when I started listening to the lyrics, which helped me a lot. Some time after that my girlfriend and I broke up, and it was about the same time when Chris Martin broke up with his partner. So he made an album about separation and breakups, but also new beginnings, and not losing faith and courage. So every time I feel like there’s no way forward, I think of him and of the band’s music, and this gives me confidence.

“If you feel you're meant to be somebody, you should try your hardest to be that person.” (Chris Martin)

Alice: Why do you think Chris Martin should be on our portrait52 list. He helped you a lot, obviously.

Maddie: It’s believing in oneself. As I read a lot about the band’s history and watched the movie about him and his band, I found out that he is very determined and ambitious, in a good way. He always thought that if they were to start a band, they had to become one of the most successful bands in the world. Everybody has difficult times now and then, and not losing the courage to go on, still believing that you can make it can be very hard. I believe that he can instill courage, he can make people believe in themselves and help them go on, even if they cannot reach their goals right away. Not losing sight of your goal, that’s the most important thing.

I have a notepad next to my front door, and when I feel down or discouraged, I think of song lines that he wrote, that the band wrote, and I write them down on that notepad. And when I get out of the house I think it’s really not as bad as It feels.

“The strongest message that we have is within the fabric of the band. We’re living proof that collaboration can work, despite the differences.” (Chris Martin)

Alice: You wear these “Love” buttons and also give them to people. What do they mean?

Maddie: These buttons come from an American non-profit organization. This organization wishes we spend less time just looking at our smartphones and more with meeting each other. With care, and friendship, and love. It wants us to remember that these are the important things in life, and we have to find one another again. The buttons are here to be shared, to compliment each other. Even one compliment a day can change so much, and the “Love” button should remind us of sharing the love.

Maddie: He wears these buttons from the beginning and also gives them away on his concerts. He is an avid supporter of this organization. I knew about this organization before, but I found it quite nice that Chris Martin is such a great supporter. I hadn’t ordered anything from them before, but then I actually ordered buttons and became a supporter myself. Chris Martin reminds me to see the good in people. To always see the positive intent. The world is so beautiful. Yes, there are things that can scare us. But it’s worth looking at the beautiful things, and especially working for them.