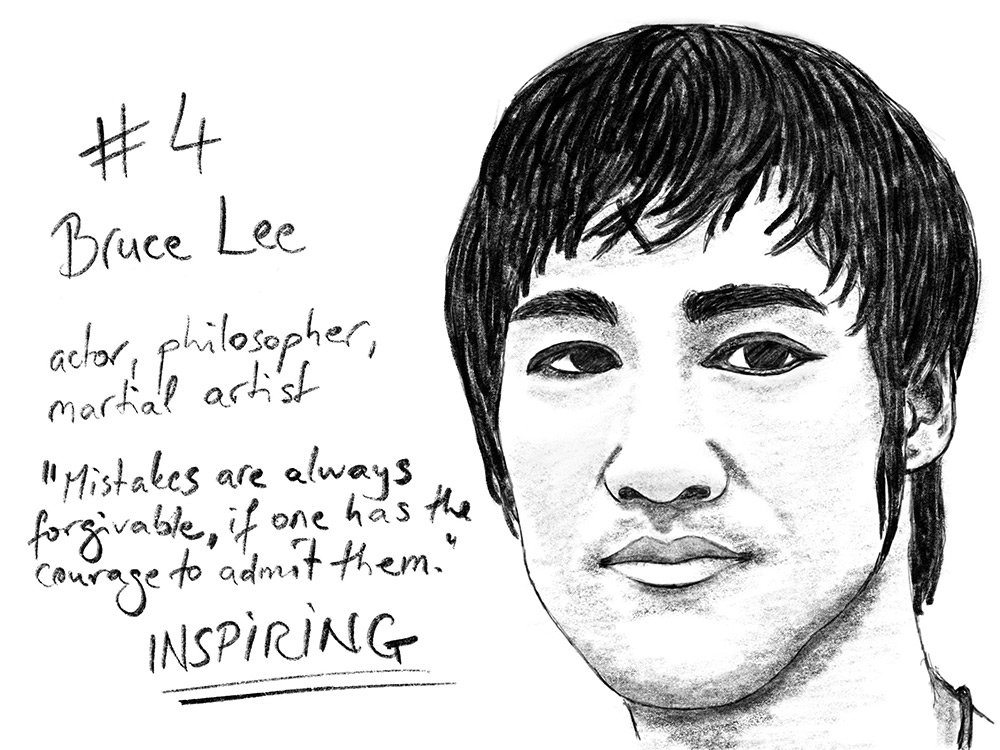 Actor, philosopher, martial artist. "Mistakes are always forgivable, if one has the courage to admit them." INSPIRING.

There’s probably no other famous person on this planet that has influenced my development as much as Bruce Lee has. And I could go on and fill this blog with tens of his quotes that you’ll probably find in every good life coaching or self-help book of the last ten years. Told in different words, but with almost identical meaning. Bruce Lee was the best life coach I could have ever wished for, long before the job was even invented! And he only cost me the equivalent of less than 50 bucks.

As a child I loved going to the movies. Growing up in communist Romania, the only movies we got in theaters were either Romanian, Russian or Chinese. None of these appealed to me. It was rather the experience of going out with my older brother that I cherished. And the watery soft ice we treated ourselves with after the movies. That was until I saw the first Bruce Lee film, which miraculously made it to Romania from Hong Kong. I was about ten or eleven at that time, I had no friends and spent most of my time reading books in winter or climbing trees in summer. I was starting to ask myself about the reason of my existence and couldn’t find a satisfying answer. I needed a purpose.

“Do not pray for an easy life, pray for the strength to endure a difficult one.” (Bruce Lee)

I don’t remember which of his movies I saw first, but I remember leaving the theater with one thought in mind: I wanted to be like Bruce Lee. The strength, the wisdom, the determination, and yes, the cockiness and self-confidence, I wanted them all. I started training his movements I remembered from the movie in our backyard. In the following years I watched and rewatched every movie and interview I could get my hands on and read everything I could find on him on the emerging internet. For a few months I even took Shotokan lessons. It was the only “martial art” taught in my hometown during that time. I didn’t like it very much, it was too limiting.

When I was sixteen, my mother got sick and went to a sanatorium for almost two years. It was a very difficult time in my life, but I mastered it, mostly because of what I had learned from Bruce Lee. When I felt anger, I hit walls, practicing one punch ten thousand times. Well, it was a cushion I pinned on a wall, but nevertheless. When I felt I couldn’t take it anymore, I prayed for strength. And developed it. When I felt the weight of the world on my shoulders (this might have been just one of those puberty symptoms most teenagers have), I tried being water, reshaping myself so that the weight might fall off. (For insiders: I know this quote is overused, but you’ve got to admit it’s a good one and I just couldn’t resist using it myself).

“Real living is living for others.” (Bruce Lee)

I don’t remember when I first heard or read this one, but it was the moment that I found my purpose. Being there for my brother and sister when my mother was away, doing the household after school, cooking for the entire family, earning money with translations to have enough for food, all that had been a burden before became a revelation. The truth of my life changed from one of hardship and suffering to one of opportunity and reward. Living for others is still one of the most important things that drive me to move forward.

If you want to learn more about Bruce Lee and his hands-on life philosophy, The Lost Interview is a good start. For a more profound insight, I can deeply recommend Bruce Lee Letters of the Dragon: The Original 1958-1973 Correspondence. And for a healthy dose of quality entertainment, any one of his movies is a real treat.

Ok, I can’t help giving you one last quote, given my teaching second nature:

“I am not teaching you anything. I just help you to explore yourself.” (Bruce Lee)