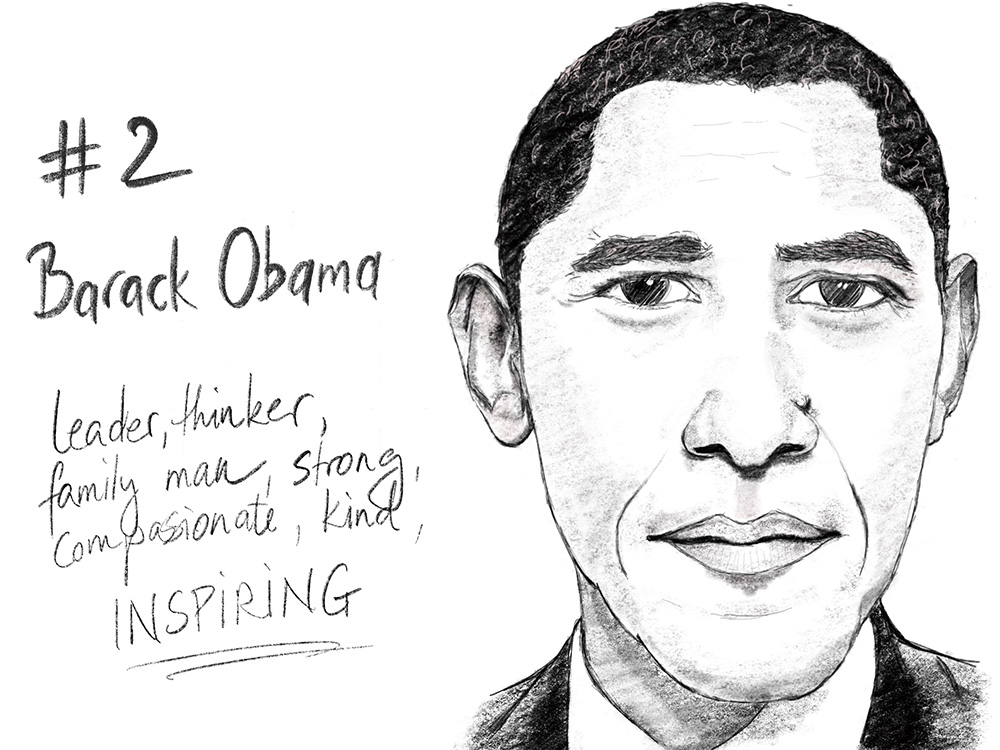 Only two things can truly sweep me off my feet: phenomenal writing and outstanding speaking abilities. While there are a lot of great writers and speakers out there, there are only a few that I’ve ever perceived as phenomenal or outstanding. For me, Barack Obama is the archetype of an inspiring speaker, with a rhetoric based on knowledge and scientific facts. So he was the natural choice for my second portrait.

While researching this portrait, I’ve watched or rewatched quite a few of his speeches. I was searching for a particular instance that’s helped me move beyond intellectual awe and has actually aided my growth. It was during one of the few meetings between Obama and Trump at the end of 2016, and the still-president was talking about how a president’s job was to make things better while the president-elect was pretending to listen.

“Let me tell you something. Better is good.” (Barack Obama)

About a year ago, Obama gave a speech in Illinois, talking about the responsibilities upcoming generations have in stopping the madness going on around us. Among others, he spoke about what it means to have a well functioning democracy: “Making democracy work means... appreciating that progress does not happen all at once, but when you put your shoulder to the wheel, if you’re willing to fight for it, things do get better. And let me tell you something... better is good.”

As I spent the first 11 years of my life growing up in a dictatorship, I learned to appreciate the power of better very early in life. It was better to have wood in winter to heat up the bedroom than to sleep in the cold. It was better to get hold on a loaf of white bread on Sunday morning after standing in line for two hours than having to eat the same “black” bread every day, the very symbol of poverty. And as I grew up and the precarious budding democracy in my homeland started to grow roots, it was better to have the chance to travel to Western Europe and enjoy the benefits of free education in my new home Germany. Not only did I find the freedom I had always dreamed of growing up, but I could finally live the life I wanted to live and be myself openly, even if it came with being rejected by my own mother because of my sexual orientation.

While many of us take these things for granted, for me every “better” was an achievement I treasured. Witnessing the rise of environmental, political and existential problems around the world, I think we should now more then ever celebrate every “better” we can reach as loudly as we can.

“Do not let people tell you the fight’s not worth it because you don’t get everything that you want... Better is always worth fighting for.” (Barack Obama)

As my mother’s death approaches it’s second anniversary, I cannot stop thinking about how I had given up trying to make our relationship better because I thought she would never accept me for who I am. Maybe I would have been able to talk to her before she died if I had just tried to make things better and go for tolerance first, instead of expecting her full acceptance from the start.

Better is good, and it’s definitely better than good enough.

So let’s start by continuously making things better, because the status quo will never be the end of the line. Unless we allow it to be.