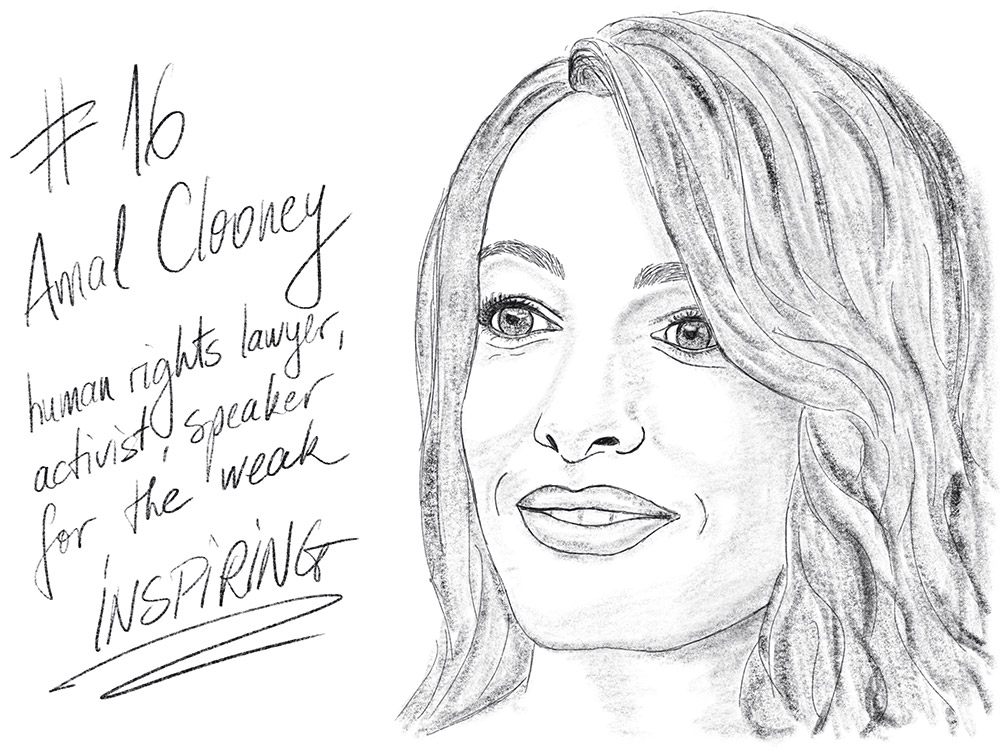 It‘s two days before Christmas and most of us are busy as hell. I am, for sure. When has Christmas time become such a stressful time, I wonder. Work, shopping, packing gifts, more shopping, preparing an opulent dinner... It’s time to take a deep breath and thank the world, the heavens, the God we might believe in, fate or pure luck for being in a situation where we can have this kind of stress. And think of the millions and millions of people who will never have this luck.

There are other people who don’t just think of them, but who act on their part, fighting for them.

“People don’t choose to become a refugee, they’re just victims of war and they are victims of circumstance. They were born in the wrong place at the wrong time and I think how we respond to that is a test of our humanity.” (Amal Clooney)

This is a short post, because there‘s not much I can write about Amal Clooney. Most of what the Internet has to say about her is related to her more famous husband. Before he met Amal, George used to replace his girlfriends like I did my personal computers before I bought my first Mac. Every one to three years. My first Mac still runs like an ace, on its first battery, by the way. And it’s in his 11th year of existence already. I digress.

Still we can draw an obvious conclusion from my unfortunate comparison. This woman is very special. She definitely convinced the eternal bachelor George of it. And she convinced heads of states and international judges as well.

December 10th was the day Marie Frederiksson‘s death was announced. I used to love Roxette, it saddened me to hear about her death. Sanna Marin, Finnland’s prime minister, was elected as the youngest government leader worldwide. And she’s a woman. It filled my heart with joy and hope. There was much controversy about one of the two winners of the Nobel prize for literature. Bush fires in Australia worsened. And then, of course, there were more impeachment news.

“I believe in international justice. I believe it's important that you don't just turn the page without people being held to account.” (Amal Clooney)

No one talked about December 10th as the international day of human rights. There was, however, some news about George and Amal having trouble in their relationship. Like every year before Christmas. And what was Mrs Clooney doing on that day? Probably her job, as methodically and effectively as always, defending those whose human rights were violated, accusing those abusing their power and violating above mentioned human rights.