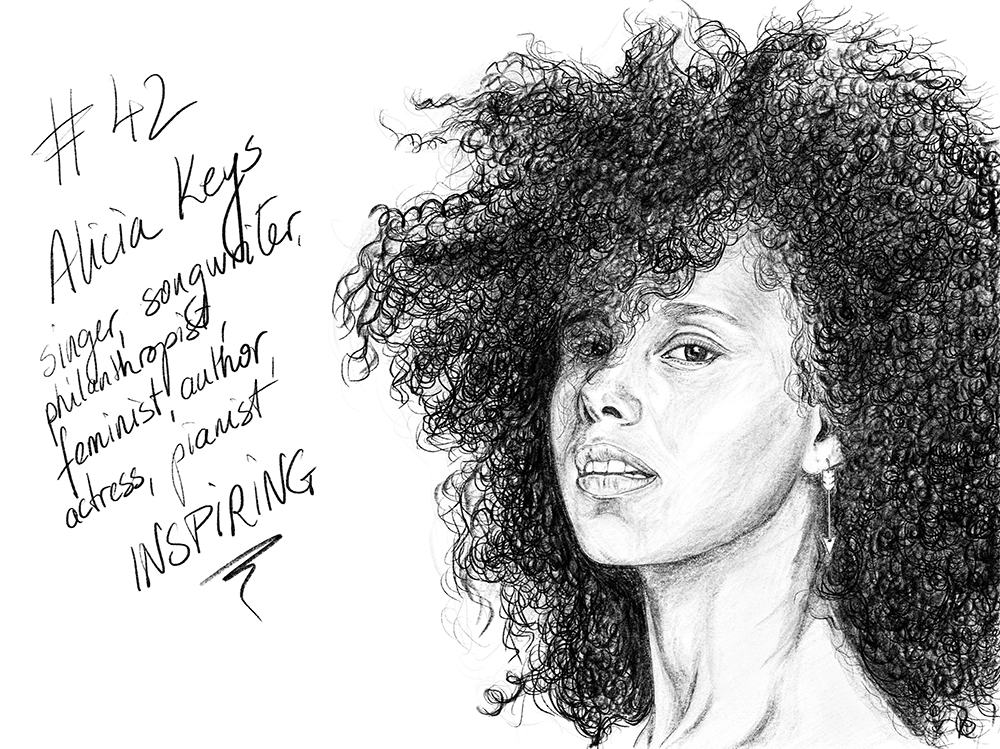 It took me a considerable amount of time to draw this portrait! Although I have learned that in order to finish one portrait a week and write a blog post related to it, I need to stop at a certain point, even if the drawing isn’t perfect. But this portrait is different. I just felt I have to put in the extra effort to make it as good as possible with the skills I have acquired so far. I just love this woman. I love all the other women I chose to portrait so far, and all the men, of course. Some of these people have proven faulty in some regards after I drew them, some have opinions I don’t agree with. They still inspire me, despite their shortcomings.

“I don't want to cover up anymore. Not my face, not my mind, not my soul, not my thoughts, not my dreams, not my struggles, not my emotional growth. Nothing.” (Alicia Keys)

But there is something different to the way I feel about Alicia Keys. And it not just the fact that she doesn’t wear makeup anymore that makes me feel so close to her. Though it is part of it, I must admit. I never put on makeup, my two attempts of doing that were at the age of four to impress Santa Claus (my uncle in disguise) and at my high school graduation ball. I felt very experimental the first time and extremely uncomfortable the second. I sometimes let professionals do it, and even if the result has its merits, I feel uneasy and stressed out because I might ruin it if one of those mini flies or a grain of sand made its way into one of my eyes.

“Everything you want to be, you already are. You're simply on the path to discovering it.” (Alicia Keys)

So yeah, there’s the makeup thing that makes her so relatable. The fact that my wife adores her music and our wedding song was If I Ain’t Got You may also play a big part. But her life story, her accomplishments, her truth are even more relatable. Alicia lived a tough life as a child and teenager and learned very early to survive and keep her integrity in a world dominated by poverty, violence or sexual harassment. She was only raised by her mother, as her father had left when she was two years old. She discovered music early in life and started learning to play the piano at seven. Through the piano and through making music (she wrote her first son at the age of 12!!!), she learned the discipline needed to keep her on her chosen path.

“Growth requires movement. And often, the only way forward is through an exit door.” (Alicia Keys)

The first record company she signed in with was Columbia. Many artists or wannabe musicians would kill to get a record deal with them. But they wanted to change everything about her. Her hair, her clothes, her weight, also her own music. They wanted to turn her into one of those other pop starlets that come and go like mayflies. She wouldn’t have it. She knew she had to do her own thing, keep her authenticity, be an artist through and through. She fought her way out of her record deal without having to produce one album and found the people who would let her be herself. I bet those big hot shots at Columbia didn’t learn anything from this story.

“The magic in any art is not only in its technique but in its authenticity. Truth in its rawest form is what resonates most powerfully.” (Alicia Keys)

Alicia Keys didn’t compromise about her art and her message. She stayed true to herself and found here crowd. This is what inspires me the most and pushes me on to drive portrait52 forward without compromising in any field of this complex endeavor. It’s difficult, tiresome and sometimes brings me to the brink of despair, as I’m not sure if we can succeed this way. But I believe in myself, I believe in our vision and everyone’s power to change the world. And we will do what we can to unleash it.

“And when I reveal my true heart, not everyone is going to approve. What I know now is that I don’t need them to.” (Alicia Keys)